Peak Rail is a preserved railway in Derbyshire, England, which operates a steam and heritage diesel service for tourists and visitors to both the Peak District and the Derbyshire Dales.

The preserved railway line is over three and a half miles (5.6 km) in length and, as of April 2016[update], operates train services from Matlock station (shared with Derwent Valley Line services from Derby via Ambergate) via the site of Matlock Riverside and Darley Dale to Rowsley South.

Peak Rail intends to extend its operational services northward to Bakewell when resources allow, extending to a total of 4.25 miles (6.84 km). Beyond Bakewell, the railway trackbed is used by the Monsal Trail. 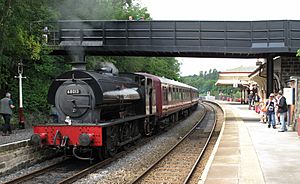 Matlock station with a Peak Rail train hauled by Hunslet Austerity 0-6-0ST 68013, 21st July 2012. The platform on the right is the one used by trains on the Network Rail network

In 1975, the Peak Railway Preservation Society was established and opened a site at the now-closed Buxton Steam Centre with restoration facilities and a 300-yard operating line. Proposals were put forward to extend the operating line onto the single track freight line towards Peak Forest, but were not met with success. However a bridge was purchased and installed over Charles Street to reconnect to Network Rail's Ashwood Dale route. The bridge was never used as the whole site was sold to Buxton Water who built a factory shortly after Peak Rail moved to Darley Dale using funds from the sale. The factory was demolished in 2011 and the site is vacant again and so available should Peak Rail ever reach Buxton. The BBC reports that the station site was proposed for redevelopment in 2014.

The Buxton Advertiser reported (20/6/19) that a meeting had been held to reoccupy the Buxton site and start a new Buxton Branch within 2 months with the first priority being to clear the site. The Peak Rail Association news quotes the support of the local MP however the builder of a new development is causing difficulties with access.

Closure of the Buxton Steam Centre and relocation to Darley Dale

In the 1980s, Peak Rail relocated its headquarters to Darley Dale and by 1991 the railway had reopened the section of line between Matlock Riverside and Darley Dale.

In 1997, the line was extended within a half-mile south of the Derbyshire village of Rowsley itself. A new station was constructed next to the site of the former loco shed at Rowsley South. The station was capable of holding long incoming charter trains and had a car park to accommodate a large number of cars and other vehicles. The station at Rowsley South has also been used for local charity events and cycle races, as well as steam and vintage vehicle rallies. With its location on the edge of the Peak District, the railway joins other attractions in the area, including Bakewell, Haddon Hall, Chatsworth House, the Rowsley shopping village, the village of Rowsley and the Cauldwell's Mill museum.

After the construction of the Matlock by-pass, and the new Sainsburys supermarket in the former Cawdor Quarry, a new track alignment and track layout was installed between Matlock Riverside and Matlock (Network Rail) station to provide a new connection to the national network.

Discussions regarding access to the Matlock down platform have resulted in an agreed 50-year lease, including the re-connection of the Network Rail and Peak Rail metals. The rails were originally disconnected due to a rearrangement of Network Rail track as a part of other redevelopments in the area south of the present Matlock Riverside station. The extension to Matlock re-opened on 2 July 2011.

The railway operates special events as well as the normal timetabled services. These include "Santa Specials" for children and families, and the "Warring Forties" event, with battle re-enactments of World War Two skirmishes involving military vehicles and re-enactors on the site; Diesel Galas; and local music festivals.

A restaurant service called "The Palatine" operates on given days throughout the season, whilst at Darley Dale there is a museum of the line's local history.

Operating groups at the railway

Several railway preservation groups are based at the railway, often working in support of and cooperation with Peak Rail. These include: 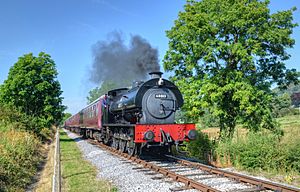 Note that the locations given may not be current as locomotives move between railways from time to time.

Signalling on the railway

Signalling diagram for the Darley Dale and Church Lane area

There are four signal boxes on the route. Two boxes control the only two level crossings on the old Midland Railway main line route from Manchester to London St Pancras. The crossings are both in the Darley Dale area on the Peak Rail line. The third signal box at Rowsley is being commissioned to control the sidings and be a public viewing exhibit. This is the former Bamford signal cabin from the Hope Valley. There are plans at Rowsley South railway station for refurbishment and future operational use. The fourth cabin at Riverside came from Luffenham. It controls the Matlock connection to the national network. 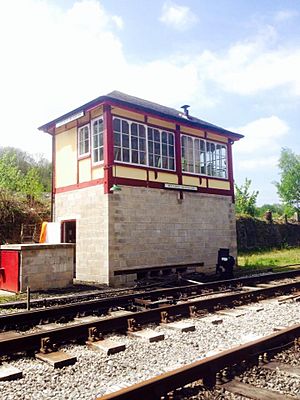 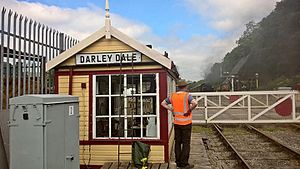 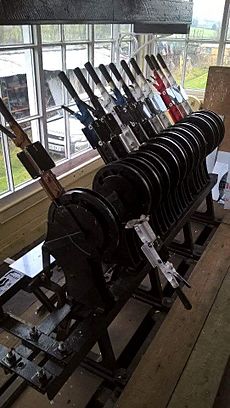 The unique LMS turnover style lever frame which works points and signals via a doublewire method of operation.

In late February 2007, the railway's 'Two-Train Running' project was completed and approved by HM Railway Inspectorate. Through improvements to infrastructure and signalling, this project allows two trains in steam on the line, using a refurbished and extended passing loop at Darley Dale. Each section of the railway is worked by a train staff, each with a key to operate the ground frames and electrical signal releases at the signal boxes and the ground frames at Rowsley South, Rowsley North, Darley South Yard sidings and Matlock Riverside.

In mid-2009, the original ex-Midland Railway Darley Dale footbridge was purchased from the Midland Railway - Butterley with an aim towards restoration and eventual repositioning at its original location at Darley Dale. Part of this project requires the removal of the unused signal box structure to facilitate the erection of the footbridge. Fundraising for this project began in late 2009 and continues.

All content from Kiddle encyclopedia articles (including the article images and facts) can be freely used under Attribution-ShareAlike license, unless stated otherwise. Cite this article:
Peak Rail Facts for Kids. Kiddle Encyclopedia.