Costa Coffee is a British multinational coffeehouse company headquartered in Dunstable, Bedfordshire, and a wholly owned subsidiary of Whitbread. It is the second largest coffeehouse chain in the world behind Starbucks and the largest in the UK.

Costa Coffee was founded in London in 1971 by the Costa family as a wholesale operation supplying roasted coffee to caterers and specialist Italian coffee shops. Acquired by Whitbread in 1995, it has since grown to 3,401 stores across 31 countries. The business has 2,121 UK restaurants, over 6,000 Costa Express vending facilities and a further 1,280 outlets overseas (including 395 in China).

Italian immigrant brothers Bruno and Sergio Costa founded a coffee roastery in Lambeth, London, in 1971, supplying local caterers. The family had moved to England in the 1960s. Costa branched out to selling coffee in 1978, when its first store opened in Vauxhall Bridge Road, London.

In 1985, Sergio bought out Bruno's share of the company. Bruno went on to found a tableware company. By 1995, the chain had 41 stores in UK. In 1995, the business was acquired by Whitbread, UK's largest hotel and coffee shop operator, becoming a wholly owned subsidiary. In 2009, Costa opened its 1,000th store in Cardiff. In December 2009, Costa Coffee agreed to acquire Coffee Heaven for £36 million, adding 79 stores in central and eastern Europe. 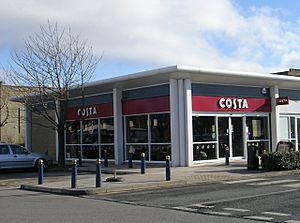 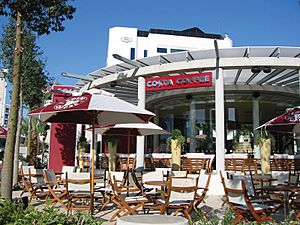 Costa Coffee operates 2,121 outlets in the United Kingdom as of May 2016. Internationally, it operates 1,280 stores throughout the world in 31 countries. The first Costa store outside the UK opened in Dubai in 1999, and was the first coffee shop worldwide in September 2017 to start delivering coffee via drones, to customers sunbathing on Dubai beaches.

As well as high street locations, many of Costa Coffee's branches are located in airports, cinemas and hospitals are either individual or corporate franchises. Costa Coffee also has small outlets positioned on out-of-town business parks, often among other food retailers, and on-site at various businesses.

Following Whitbread's £59.5m acquisition of Coffee Nation, a chain of coffee machines, the machines were re-branded as Costa Express. The company plans to expand to target hospitals, universities and transport interchanges. These coffee bars will use the same coffee beans as used in Costa stores and will use fresh milk. 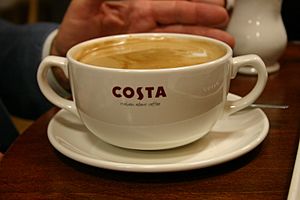 Coffee served in a Massimo cup

Costa Coffee moved its own roastery from Lambeth to Basildon, Essex, in May 2017 with an investment of 38 millions pounds, increasing the roasting capacity from 11,000 to 45,000 tons of coffee beans per year. The blend served in retail stores is their own "Mocha Italia", it contains a blend of arabica and robusta.

Costa Coffee employs Gennaro Pelliccia as a coffee taster, who had his tongue insured for £10m with Lloyd's of London in 2009.

All content from Kiddle encyclopedia articles (including the article images and facts) can be freely used under Attribution-ShareAlike license, unless stated otherwise. Cite this article:
Costa Coffee Facts for Kids. Kiddle Encyclopedia.