The River Wharfe is a river in Yorkshire, England. For much of its length it is the county boundary between West Yorkshire and North Yorkshire.

Its valley is known as Wharfedale. The river source is at Beckermonds in Langstrothdale in the Yorkshire Dales National Park and flows through Kettlewell, Grassington, Bolton Abbey, Addingham, Ilkley, Burley-in-Wharfedale, Otley, Wetherby and Tadcaster. It then flows into the River Ouse near Cawood. The section of the river from its source to around Addingham is in Upper Wharfedale and has a very different character to the river downstream.

The Wharfe is 65 miles (104.6 km) long before it joins the Ouse making it the 21st longest river in Britain. It is a public navigation from the weir at Tadcaster to its junction with the Ouse near Cawood and is tidal from Ulleskelf to the Ouse.

The name 'Wharfe', at least in its present form, derives from the Old Norse hverfi meaning 'to turn'. However, this likely influenced by a preceding Brittonic name, derived from the obscure element *werβ (related to Middle Welsh gweryn, 'liquid'). 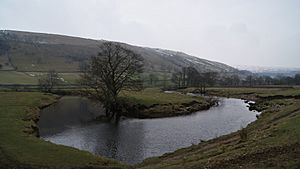 The River Wharfe meandering between Starbotton and Kettlewell. 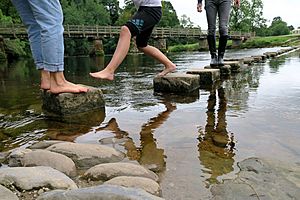 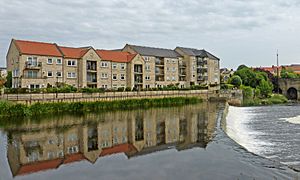 The River Wharfe at Wetherby; the largest settlement on the course of the Wharfe.

The river source is the confluence of Oughtershaw Beck and Green Field Beck in Langstrothdale near Beckermonds. It flows east and south-east taking the flows from many small streams, whose sources are the sink holes from Yockenthwaite Moor on the north bank and Horse Head Moor on the south bank. After Hubberholme, the river flows south past Buckden and Starbotton and then south-east past Kettlewell before flowing south again. Near Conistone are the gentle waterfalls of Scar Lash. Near Grassington, the river turns south-east over Linton Falls. South of Appletreewick, the river flows south-west for a short distance until it reaches Gill Beck and returns southward. To the north of Bolton Bridge, the river narrows and goes over waterfalls in an area known as The Strid. The river winds south and south-east towards Ilkley where it heads east through Otley and Collingham. It briefly flows north to Wetherby before turning south and then south-east through Tadcaster to the confluence with the River Ouse.

A serious flood in 1686 carried away a number of bridges and buildings.

The Wharfe has populations of signal crayfish and the few white-clawed crayfish remaining are at great risk. The river is also home to a colony of fine-lined pea mussels. The creature is mostly congregated in rivers in Wales and central and southern England; the presence of the mussels in the Wharfe has been noted as a "considerable outpost".

The limestone pavements of the area are a habitat for several species usually confined to woodlands, such as dog's mercury, wood anemone and ramsons. Rarer species to be found in the grikes include baneberry and downy currant. Ferns in the moist grikes include rigid buckler-fern. Also to be found are alternate-leaved golden saxifrage, reed canary-grass and stone bramble.

Some of the inaccessible cliffs are home to ledge dwelling flora including mosses and liverworts, such as red leskea, sharp rock-bristle and the very rare Zygodon gracilis. The ledges also support woodrush, polypody and water avens, purple saxifrage, yellow saxifrage, hoary whitlowgrass and roseroot.

Species of tree and shrub include ash, downy birch, hazel, hawthorn, yew and rowan. In the woods shrubs such as wild privet and spindle can be found. More rare is dark red helleborine.

Upper Wharfedale is an area whose rocks date from the Lower Carboniferous period and lies north-west of Burnsall. Its main features are the Great Scar Limestone which forms a base to the overlying Yoredale Beds, a 300-metre deep strata of hard limestones, sandstones and shale. These have been slightly tilted, toward the east. To the south-east of the area is the Millstone Grit laid down in the Upper Carboniferous period, and covered by heather moorland, hard crags and tors.

Weathering of the Yoredale Beds has produced a stepped profile to the valley sides, consisting of a shelf of limestone, sometimes grassy but often displaying such karst features as limestone pavement, gorges and sinkholes. During the last ice age, the local ice cap at the head of the Dales fed glaciers to produce the classic U-shaped profiles seen today.

Where the river valley changes course into Lower Wharfedale, the change of underlying rock can be seen in the darker stone in the field walls. The Millstone Grit outcrops at the Cow and Calf Rocks near Ilkley form a rolling dissected plateau. Due to the impermeable nature of the rock, blanket bogs and mires form, and drier areas have wet and dry heaths and acid grasslands.

Glacial lakes once filled Lower Wharfedale in which were deposited sand and gravel. These deposits were extracted and now form the basis of the Otley Wetland Reserve, and Ben Rhydding and Knotford Nook gravel pits.

The Strid (grid reference: SE064565) is a series of waterfalls and rapids associated with a deep underwater channel caused by the dramatic narrowing of the River Wharfe from approximately 30 yd (27 m) wide, just to the north of the start of the Strid, to the width of a long stride less than 100 yards (91 metres) later. It is especially dangerous as both banks are undercut, and it has been the scene of a number of fatalities including those of a honeymooning couple in 1998. The Strid walk is very popular and is accessed from the car park at Bolton Abbey.

Its name comes from the Old English Stryth meaning 'turmoil'. This was later corrupted to Strid, referring to 'the possibility of striding across.'

The Strid's hazardous nature is referenced in several literary works, including The Force of Prayer by William Wordsworth, and The Striding Place by Gertrude Atherton.

Linton Falls (grid reference: SE001633) are located close to the village of Linton, just south of Grassington. The falls can be accessed from the town via Sedber Lane. There is a footbridge straddling the falls for viewing.

The name Wharfe appears to be recorded in the form Verbeiae on a Roman inscription at Ilkley, dedicated to Verbeia, thought to be the tutelary goddess of the river. The name is probably of Brythonic origin, from a root meaning "winding". Later forms of the name were probably influenced by the Old Norse hwerfi, meaning "bend".

Iron Age fields and hut circles can still be seen in outline on the hills above Grassington and Kettlewell. The Romans built a road through Wharfedale that went over Stake Moss into neighbouring Wensleydale. The local British tribe of Brigantes were subdued by the Romans in AD 74. The Romans mined lead in the hills on Greenhow Hill overlooking Appletreewick until AD 410. After AD 620 the Ancient Britons were joined by Angles and increased the amount of forest clearing to establish fields for crops and animals. These were overrun by Danes initially before they too settled to farming near Burnsall and Thorpe. Vikings then settled the area in the 10th century, lending their language to some of the names of hamlets and landscape features of Upper Wharfedale, especially near the head of the valley. During Anglo-Saxon times, large estates were established and the River Wharfe and its valley came under the protection of Earl Edwin of Bolton-in-Craven. After the Norman invasion, the lands were given to Robert Romilly.

In medieval times low intensity methods were used to produce both crops and livestock but the great monasteries of Fountains, Rievaulx and Bolton Priory had large sheep flocks and sold their wool on the European market. In 1155, Alice de Romilly donated land for the establishment of Bolton Priory and land at Kilnsey to Fountains Abbey. The monasteries helped develop vast sheep farms and the founding of drove roads, which can still be seen and walked today. The success of the monasteries was also responsible for the growth of the market towns of Grassington and Kettlewell.

When the monasteries were dissolved in 1539, and wool prices fell, many tenant farmers took to cattle and sheep rearing. However, at the end of the 17th century there was still small-scale arable production. By the early 19th century there was a demand for food from the growing industrial towns and farmers and many farms began to produce milk from the lower lands and use the higher fells for sheep.

On 5 July 2014, the Tour de France Stage 1 from Leeds to Harrogate passed through Wharfedale along roads running close to the river. The route in Wharfedale started near the official start at Harewood and ended just after Buckden when the competitors turned to climb over Kidstones Pass near Cray.

The river has had appearances in films. In 1992, the town of Grassington was used as a filming location for Wuthering Heights. The 2003 film, Calendar Girls, was filmed at several locations in the river valley including Buckden, Burnsall, Kettlewell and Kilnsey. 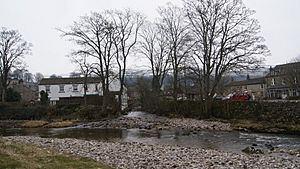 During the 1990s there had been an increase in second home ownership, particularly in the Upper Wharfedale area. The 1991 census had shown 13% of homes in the Craven district were classified as second properties. The 2001 census showed that the figure for Upper Wharfedale was 15%, but it had dropped to only 7% by 2011.

Upper Wharfedale has been traditionally associated with farming, but there has been a change in the numbers and types of employment. Whilst there were declines in the number of people in this industry, farming accounted directly for 9.16% of employment in 2001 but this had increased to 11.27% by 2011.

Lead mining was once the main industry in Wharfedale. From the 17th century to the late 19th century it employed hundreds of men and boys, exploiting the veins in the limestone at Greenhow, Hebden, Grassington, Linton and Conistone, Appletreewick and elsewhere. The heaps of mining waste remain, contaminated with lead, and on which little will grow. The few plants that will are known as 'lead plants' such as spring sandwort and alpine penny-cress.

Tourism is important to the rural economy of Wharfedale and there are many short, mid and long distance walks, with clear waymarkers. Other outdoor activities take place such as rock climbing, most notably at Kilnsey Crag, kayaking and canoeing. Other activities include cycling, mountain biking, horse riding and caving. Several long distance walks pass near or over the river:

See also: List of crossings of the River Wharfe

All lists are from the source of the river:-

Along the River Wharfe

All content from Kiddle encyclopedia articles (including the article images and facts) can be freely used under Attribution-ShareAlike license, unless stated otherwise. Cite this article:
River Wharfe Facts for Kids. Kiddle Encyclopedia.