Grassington is a market town and civil parish in the Craven district of North Yorkshire, England. The population of the parish at the 2011 Census was 1,126. Historically part of the West Riding of Yorkshire, the town is situated in Wharfedale, about 8 miles (10 km) north-west from Bolton Abbey, and is surrounded by limestone scenery. Nearby villages include Linton, Threshfield, Hebden, Conistone and Kilnsey. 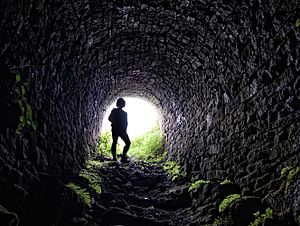 The Domesday Book lists Grassington as part of the estate of Gamal Barn including 7 carucates of ploughland (840 acres/350ha) including Grassington, Linton and Threshfield. The Norman conquest of England made it part of the lands of Gilbert Tison. But by 1118 Tison had suffered a demotion and his lands returned to the king then given to Lord Percy.

Originally the settlement was spelt as Gherinstone and also was documented as Garsington or Gersington. The name Grassington derives variously from the Scandinavian, Anglo-Saxon and Gothic languages and means either the town of the grassy ings or a farmstead surrounded by grass.

Grassington was historically a township in the parish of Linton in the West Riding of Yorkshire. It became a separate civil parish in 1866, and was transferred to North Yorkshire in 1974.

Although often described by local people as a village, Grassington was granted a Royal Charter for a market and fair in 1282 giving it market town status. The market was held regularly until about 1860. A change in land use from the early 17th century, when lead mining began to assume more importance, brought some prosperity, but Grassington's heyday arrived during the late 18th and early 19th centuries. The opening of the Yorkshire Dales Railway to Threshfield in 1902 brought new visitors, many of whom settled, some finding work in Skipton or in the developing limestone quarries. The Old Hall at Grassington is reputedly the oldest house in Yorkshire, dating from the late 13th or early 14th century.

Grassington is the main residential and tourist centre in Upper Wharfedale. Centred on its small cobbled square are shops, public houses, the village museum, small cafes, restaurants and hotels. Grassington Folk Museum houses a collection which tells the story of Wharfedale. It is an independent museum run and managed by volunteers. Upper Wharfedale Fell Rescue Association, based in Grassington, is a voluntary mountain rescue organisation which rescues people in trouble on the surrounding fells and in caves.

Grassington Festival is a two-week-long annual event started in 1980, with music, performance and visual arts, held in a number of venues around the village.

Every September since 2011, Grassington has held a 1940s themed weekend. Events include war re-enactments, dances and a variety of military and civilian vehicles on display from the period.

In the winter Grassington holds the Dickensian Festival, with period costumes, Christmas activities and commercial selling.

Three miles north of Grassington, at Kilnsey, is the glacially carved overhang of Kilnsey Crag.

Grassington is served by the B6265, which runs between Skipton and Green Hammerton via Pateley Bridge and Boroughbridge (being a more circuitous route that the A59 road which connects Skipton and Green Hammerton). Buses connect Grassington with Ilkley and Skipton operating a moderate service to Skipton, but only a three day a week service to Ilkley.

The town used to have a joint railway station terminus with Threshfield on the Yorkshire Dales Railway. The station was located on the west side of the River Wharfe, so it was not actually in Grassington. The line opened in July 1902 but closed down in September 1930 after only 28 years of service. The station remained open to freight and railtour traffic until 1969 when the tracks were removed south as far as the limestone quarry at Swinden. The site of the railway station is now a housing estate, but the Campaign for Better Transport have listed the Skipton to Grassington line as one which they wish to see re-opened to passenger traffic.

In 1909 Grassington received its first electricity from a hydroelectric plant at Linton Falls, which continued to operate until 1948 when the National Grid arrived in the area. In March 2012 a new hydroelectric power plant was opened using the same but restored turbine house, which provides 500,000 kWh of electricity a year, using two Archimedean screws.

Grassington has a Church of England primary school located in the town and there is another primary school in nearby Threshfield. Secondary education is either at the Upper Wharfedale School, which is a non-selective specialist sports college, or in Skipton at Ermysted's Grammar School (boys only) and Skipton Girls High School, both of which are selective.

All content from Kiddle encyclopedia articles (including the article images and facts) can be freely used under Attribution-ShareAlike license, unless stated otherwise. Cite this article:
Grassington Facts for Kids. Kiddle Encyclopedia.