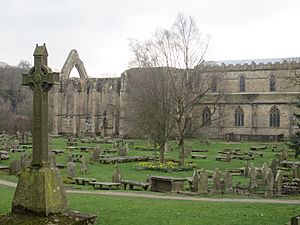 The graveyard by the Priory 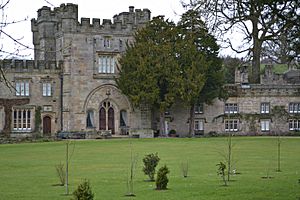 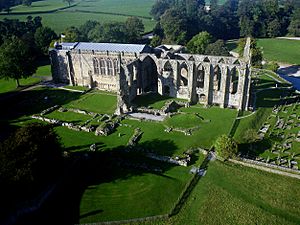 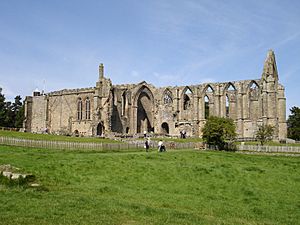 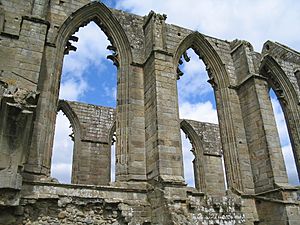 Bolton Abbey in Wharfedale, North Yorkshire, England, takes its name from the ruins of the 12th-century Augustinian monastery now known as Bolton Priory. The priory, closed in the 1539 Dissolution of the Monasteries ordered by King Henry VIII, is in the Yorkshire Dales, next to the village of Bolton Abbey.

The estate is open to visitors, and includes many miles of all-weather walking routes. The Embsay & Bolton Abbey Steam Railway terminates at Bolton Abbey station one and a half miles/2.5 km from Bolton Priory. 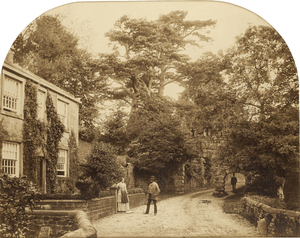 The monastery was founded at Embsay in 1120. Led by a prior, Bolton Abbey was technically a priory, despite its name. It was founded in 1154 by the Augustinian order, on the banks of the River Wharfe. The land at Bolton, as well as other resources, were given to the order by Lady Alice de Romille of Skipton Castle in 1154. In the early 14th century Scottish raiders caused the temporary abandonment of the site and serious structural damage to the priory. The seal of the priory featured the Blessed Virgin Mary and the Child and the phrase sigillum sancte Marie de Bolton.

The nave of the abbey church was in use as a parish church from about 1170 onwards, and survived the Dissolution of the Monasteries.

Building work was still going on at the abbey when the Dissolution of the Monasteries resulted in the termination of the priory in January 1540. The east end remains in ruins. A tower, begun in 1520, was left half-standing, and its base was later given a bell-turret and converted into an entrance porch. Most of the remaining church is in the Gothic style of architecture, but more work was done in the Victorian era, including windows by August Pugin. It still functions as a church today, holding services on Sundays and religious holidays. 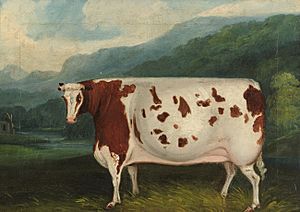 The Domesday Book lists Bolton Abbey as the caput manor of a multiple estate including 77 carucates of ploughland (around 9240 acres/3850 ha) belonging to Edwin, Earl of Mercia. The estate then comprised Bolton Abbey, Halton East, Embsay, Draughton; Skibeden, Skipton, Low Snaygill, Thorlby; Addingham, Beamsley, Holme, Gargrave; Stainton, Otterburn, Scosthrop, Malham, Anley; Coniston Cold, Hellifield and Hanlith. They were all laid waste in the Harrying of the North after the defeat of the rebellion of Edwin, Earl of Mercia and classified as the Clamores (disputed land) of Yorkshire until around 1090, when they were transferred to Robert de Romille, who moved its administrative centre to Skipton Castle. The Romille line died out around 1310, and Edward II granted the estates to Robert Clifford.

In 1748 Baroness Clifford married William Cavendish and Bolton Abbey Estate thereafter belonged to the Dukes of Devonshire, until a trust was set up by the 11th Duke of Devonshire turning it over to the Chatsworth Settlement Trustees to steward.

Today, the 33,000 acre (134 km2) estate contains six areas designated as Sites of Special Scientific Interest, including Strid Wood, an ancient woodland (mainly oak), which contains the length of the River Wharfe known as The Strid, and a marine fossil quarry. The estate encompasses 8 miles (13 km) of river, 84 farms, 84 buildings of architectural interest, and four Grade I listed buildings; and is currently home to 27 businesses from tearooms to bookshops. The iconic stepping stones cross the River Wharfe near the Abbey ruins. The estate includes extensive grouse moors, including Barden Moor on the west side of Wharfedale and Barden Fell on the east side of the dale. There is also a pheasant shoot. Apart from people employed within these businesses, the estate employs about 120 staff to work on the upkeep of the estate.

Bolton Abbey Hall, originally the gatehouse of the priory, was converted into a house by the Cavendish family. The hall is a Grade II* listed building.

As well as Bolton Abbey, the Cavendish family also own the Chatsworth (Derbyshire, England) and Lismore Castle (Waterford, in the Republic of Ireland) estates.

In the early nineteenth century, a cow known as the Craven Heifer was bred on the Bolton Abbey estate. Weighing 312 stone (1.98 tonnes), and measuring 11 ft 4ins in length and over 7 ft in height, she to this day remains Britain's largest ever cow.

The Priory Church of St. Mary and St. Cuthbert, Bolton Abbey, is an active Church of England church, serving the village and parish of Bolton Abbey, with a full calendar of liturgical events, and a full-time rector who lives in the adjacent Rectory. The current church is the surviving part of the otherwise ruined 12th-century Augustinian religious community originally known as Bolton. It is situated in the Yorkshire Dales National Park, within the Bolton Abbey estate.

The remains of the priory can still be seen, and the setting is immortalised in both art and poetry.

These include a painting by Edwin Landseer and watercolours by J. M. W. Turner one of which, Bolton Abbey, Yorkshire (1809), is held at the British Museum. The young Brontë sisters are believed to have visited the estate while Landseer was in residence. (Researching for his painting Bolton Abbey in Olden Times, the young authors were escorted on an exclusive guided tour by an unnamed 'E'.) The following year Charlotte Brontë exhibited a drawing 'Bolton Abbey' alongside stars of the day at the Royal Northern Festival of Arts, Leeds. When first discovered by Jane Sellars and Christine Alexander in 1994, it was thought based on Turner's view of 1809, but further research, and detail of a drifting heron relates the drawing more closely to Landseer's oil-sketch of the same scene, which shows a heron drifting toward Charlotte's reciprocal bird, as if to embrace. Landseer's sketch was never exhibited or reproduced, it reiterates therefore that the Brontës met the influential artist in 1833. William Wordsworth's poem The White Doe of Rylstone was inspired by a visit to Bolton Abbey in 1807.

All content from Kiddle encyclopedia articles (including the article images and facts) can be freely used under Attribution-ShareAlike license, unless stated otherwise. Cite this article:
Bolton Abbey Facts for Kids. Kiddle Encyclopedia.