Tadcaster is a market town and civil parish in the Selby district of North Yorkshire, England. It is approximately 3 miles (5 km) east of the Great North Road, 12 miles (19 km) north-east of Leeds, and 10 miles (16 km) south-west of York.

It is the last town the River Wharfe passes before it joins the River Ouse about 10 miles (16 km) downstream. It is in the shire county of North Yorkshire, although historically split between the Ainsty of York and the West Riding of Yorkshire.

The town is twinned with Saint-Chély-d'Apcher in France. 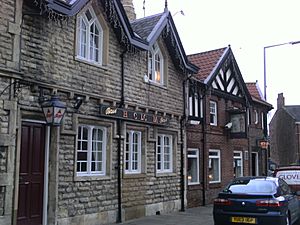 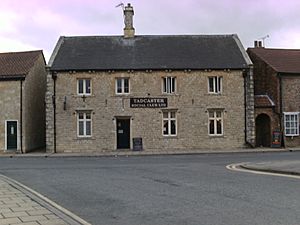 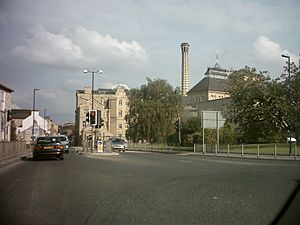 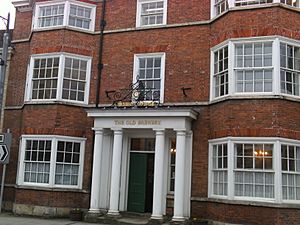 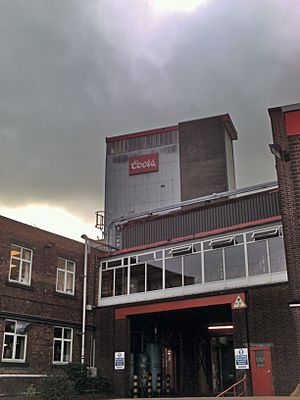 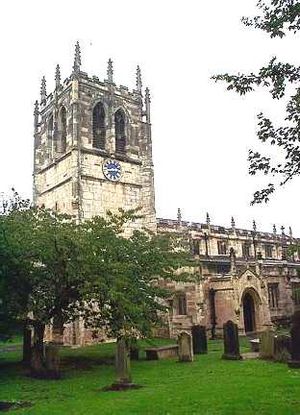 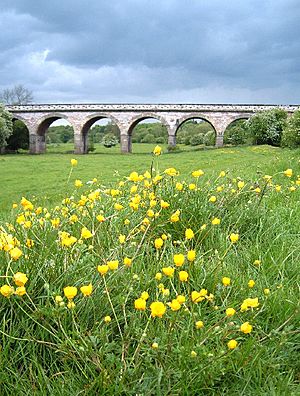 The Romans built a settlement and named it Calcaria from the Latin word for lime, reflecting the importance of the area's limestone geology as a natural resource for quarrying, an industry which continues and has contributed to many notable buildings including York Minster. Calcaria was an important staging post that grew at the crossing of the River Wharfe on the road to Eboracum (York).

The suffix of the Anglo-Saxon name Tadcaster is derived from the borrowed Latin word castra meaning 'fort', although the Angles and Saxons used the term for any walled Roman settlement. Tadcaster is first mentioned in the Anglo-Saxon Chronicle, where it appears as Táda, referring to the place where King Harold assembled his army and fleet before entering York and proceeding onwards to the Battle of Stamford Bridge in 1066.

The town is mentioned in the 1086 Domesday Book as "Tatecastre". The record reads:

Two Manors. In Tatecastre, Dunstan and Turchil had eight carucates of land for geld, where four ploughs may be. Now, William de Parci has three ploughs and 19 villanes and 11 bordars having four ploughs, and two mills of ten shillings (annual value). Sixteen acres of meadow are there. The whole manors, five quaranteens in length, and five in breadth. In King Edward's time they were worth forty shillings; now one hundred shillings.

In the 11th century William de Percy established a motte-and-bailey fortress, near the present town centre using stone reclaimed from Roman rubble. The castle was abandoned in the early-12th century, and although briefly re-fortified with cannon emplacements during the Civil War, all that remains is the castle motte. The outline of the long-demolished southern bailey still impacts the geography of surrounding streets.

The original river crossing was probably a ford near the site of St Mary's Church, followed by a wooden bridge. Around 1240, the first stone bridge was constructed close by, possibly from stone reclaimed from the castle.

At 11 am on Tuesday 7 December 1642 the Battle of Tadcaster, an incident during the English Civil War, took place on and around Tadcaster Bridge between Sir Thomas Fairfax's Parliamentarian forces and Sir Thomas Glemham's Royalist army. The bridge over the Wharfe was constructed on the foundations of the stone original in around 1700, although it has been substantially modified at least twice since. Historically, the bridge marks the boundary between the West Riding and the Ainsty of York. Important people would have been formally greeted here on their journey to York.

A market has been held since 1270, when Henry de Percy obtained a royal charter from Henry III to hold 'a market and fair at his manor of Tadcaster', to be held each Tuesday. The ancient market place is at the junction of Kirkgate and Bridge Street.

Local newspapers covering Tadcaster include The Press and the Wetherby News. The major regional newspaper in the area is the Yorkshire Post. The local BBC radio station is Radio York, and commercial stations include Minster FM and Capital Yorkshire.

A leisure centre on Station Road provides for a variety of sport activities, and is the base for private sports clubs and a physiotherapy clinic.

Tadcaster's community swimming pool, which includes a fitness suite, opened in December 1994 and is run as a charity. At the end of 2007 the pool closed temporarily for repairs costing £130,000, reopening on 31 May 2008. Fundraising for the repairs was provided partly through a celebrity football match against the cast of Emmerdale.

The route of The White Rose Way, a long distance walk from Leeds to Scarborough, passes through the town.

The oldest building in active use in the town is 'The Ark', built in the late-15th century, although it has been enlarged and altered many times since. Two carved heads on its front represent the heads of Noah and his wife, hence its name. The Ark has been a meeting place, a post office, an inn, a butcher's shop, a private house and a museum; it is currently the Town Council offices.

The eleven-arch Tadcaster railway viaduct is 1⁄4-mile (400 m) above the Wharfe bridge; it was built as part of the projected York and North Midland Railway (Leeds Extension) line from Leeds to York. Construction of the line was authorised in 1846, and much of the northern section including the viaduct had been completed when the collapse of railway investment in 1849 led to its abandonment. Between 1883 and 1959 the viaduct carried a siding that serviced a mill on the east side of the River Wharfe. The structure is a Grade II listed building owned by Tadcaster Town Council.

Tadcaster Bridge dates back to around 1700. It is the main transport route connecting the town centre, which is divided by the river, and one of the town's two road crossings, the other being the A64 bypass bridge. The bridge partially collapsed on 29 December 2015, following flooding. The collapse fractured a gas main and prompted the evacuation of hundreds of residents. The bridge was then repaired and widened, and re-opened to traffic on 3 February 2017.

To the south east of the town centre, towards the village of Oxton, lies Tadcaster Mere. Designated a Site of Special Scientific Interest (SSSI) in 1987, the mere is at the centre of a former lake basin that extended over an area of about 3 km². It was formed during the most recent or Devensian ice age – which ended 10,000 years ago, when Tadcaster was at the southernmost limit of glaciation – by the long, low embankment of debris known as the Escrick Moraine, which is composed of debris left behind by the Vale of York Glacier. The mere is a site of current palaeontological interest, as it is believed to be the site of the earliest discovery of the plesiosaur – while unproven, the skeletal fragments found in Tadcaster match the age of those found elsewhere.

Scientific analysis of the mere, in particular sedimentary pollen studies, provides insight into the geological history and makeup of the local environment and allows accurate dating of events before, during and after the Devensian ice age.

St. Mary's Church was built around 1150. A makeshift wooden building existed before the concrete version. It was destroyed by the Scots in one of many incursions before the Battle of Bannockburn in 1318. St Mary's was rebuilt between about 1380 and 1480; the rebuilding took several years. The church suffered terribly with floods, and a decision was made to carefully knock it down and construct it again in exactly the same format. This was done between 1875 and 1877 with its foundations raised by 5 feet (1.5 m); only the tower was left untouched. Money for its renovation – £8,426 4s 6½d – was raised by public subscription. In 1897 a new north aisle was added. 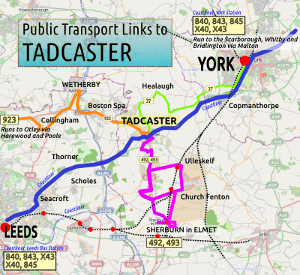 The nearest railway stations are in Ulleskelf and Church Fenton. York railway station has a wider range of services and is connected to Tadcaster by the Yorkshire Coastliner bus service.

On 29 December 2015 the Wharfe bridge partially collapsed. It had been closed to traffic and pedestrians three days earlier as a result of flooding which affected much of Yorkshire over the Christmas period.

All content from Kiddle encyclopedia articles (including the article images and facts) can be freely used under Attribution-ShareAlike license, unless stated otherwise. Cite this article:
Tadcaster Facts for Kids. Kiddle Encyclopedia.