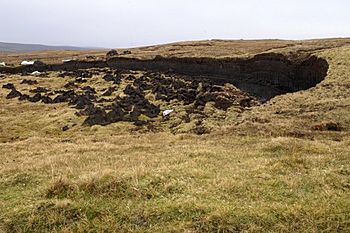 Blanket bog on the Yell, Shetland Islands, with some peat working

Blanket bog or blanket mire, also known as featherbed bog, is an area of peatland, forming where there is a climate of high rainfall and a low level of evapotranspiration, allowing peat to develop not only in wet hollows but over large expanses of undulating ground. The blanketing of the ground with a variable depth of peat gives the habitat type its name. Blanket bogs are found extensively throughout the northern hemisphere - well-studied examples are found in Ireland and Great Britain, but vast areas of the Russian and North American tundra also qualify as blanket bogs. In Europe, the southernmost edge of range of this habitat has been recently mapped in the Cantabrian Mountains, northern Spain.

In the southern hemisphere they are less well-developed due to the relatively low latitudes of the main land areas, though similar environments are reported in Patagonia, the Falkland Islands and New Zealand. The blanket bogs known as 'featherbeds' on subantarctic Macquarie Island occur on raised marine terraces; they may be up to 5 m (16 ft) deep, tremble or quake when walked on and can be hazardous to cross. It is doubtful whether the extremely impoverished flora of Antarctica is sufficiently well developed to be considered as blanket bogs.

In some areas of Europe, the spread of blanket bogs is traced to deforestation by prehistoric cultures.

In many areas peat is used as a fossil fuel either in electricity generation or domestic solid fuel for heating. In the Republic of Ireland a state owned company, Bord na Móna, owns large areas of bog land and harvests peat for electricity generation but that peat is mainly from the raised bogs in the central plains. Bord na Móna used to burn peat in the peat fired generating station at Bellacorick but that closed down many years ago and the area now houses a large windfarm.

Some blanket bogs are now preserved by government organisations in both Ireland and Great Britain, as this habitat is under threat from extensive harvesting. Examples of protected blanket bogs include Sliabh Beagh, Bellacorick and Airds Moss.

All content from Kiddle encyclopedia articles (including the article images and facts) can be freely used under Attribution-ShareAlike license, unless stated otherwise. Cite this article:
Blanket bog Facts for Kids. Kiddle Encyclopedia.