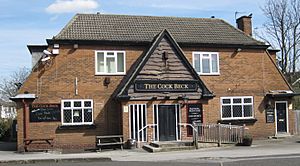 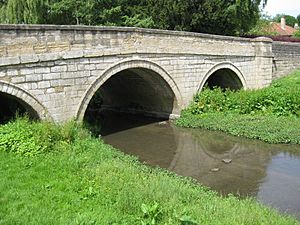 Bridge over the Cock Beck, Aberford 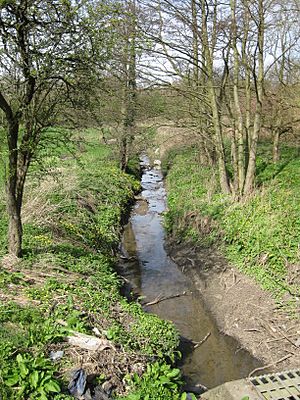 Cock Beck from the bridge on Barwick Road near the pub

Cock Beck is a stream in the outlying areas of East Leeds, West Yorkshire, England, which runs from its source due to a runoff north-west of Whinmoor, skirting east of Swarcliffe and Manston (where a public house has been named 'The Cock Beck'), past Pendas Fields, Scholes, Barwick-in-Elmet, Aberford, Towton, Stutton, and Tadcaster, where it flows into the River Wharfe.

It is a tributary of the River Wharfe, formerly known as the River Cock or Cock River, having a much larger flow than today. The name 'cock' may refer to a mature salmon, as it was a spawning ground for salmon and trout. Industrial pollution reduced the fish stock, but it has been recovering in the 21st century, aided by work from the Environment Agency. In places the beck was relatively narrow, but too deep to cross unaided; a feature which can still be seen today at many points. 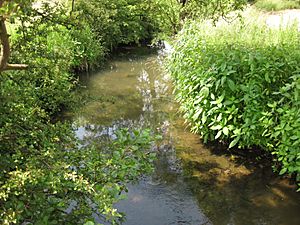 Cock Beck from the bridge near the Crooked Billet public house, Towton

The Great North Road crossing at Aberford was first a Celtic trackway and later a Roman road. It is defended on the north side by 4.5 miles of Iron Age fortifications known as the Aberford Dykes which run from a hill fort at Barwick-in-Elmet, through Aberford and a mile east, consisting of a ditch and ridge. It is believed that this was a defensive construction of the Brigantes against southern tribes and the Romans. The river may have been engineered to increase the barrier.

Cock Beck is identified as a likely site of the Battle of the Winwaed on 15 November 655, a decisive victory of Oswiu of Bernicia over King Penda of Mercia.

The beck is thought to be the one after which Becca Hall, whose name is first attested, as Becca, in 1189, is named.

In the aftermath of the 1461 Battle of Towton remnants of the Lancastrian forces fleeing the victorious Yorkists were forced to try to cross the Cock Beck, having already disposed of most of their arms. Many drowned in the Beck, and soon the survivors were reported to be crossing the Cock Beck on bridges of their fallen comrades.

John Ogilby's 1675 map indicates the major crossing for the Cock was sited along the Tadcaster-Ferrybridge road.

All content from Kiddle encyclopedia articles (including the article images and facts) can be freely used under Attribution-ShareAlike license, unless stated otherwise. Cite this article:
Cock Beck Facts for Kids. Kiddle Encyclopedia.