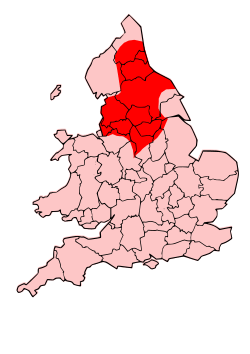 Where the Brigantes used to live - in red.

The Brigantes were a British Celtic tribe (people), that used to live in the North of Roman Britain; between the rivers Tyne and Humber. They occupied what was later Northumbria.

The tribes that used to live next to the Brigantes were the Carvetti, the Parisii, the Cornovii, and the Corieltauvi.

There was a Brigantes tribe who used to live in the South of Ireland as well. They may both be related to the Brigantii of the eastern Alps.

All content from Kiddle encyclopedia articles (including the article images and facts) can be freely used under Attribution-ShareAlike license, unless stated otherwise. Cite this article:
Brigantes Facts for Kids. Kiddle Encyclopedia.