Anemonoides nemorosa (syn. Anemone nemorosa), the wood anemone, is an early-spring flowering plant in the buttercup family Ranunculaceae, native to Europe. Other common names include windflower, thimbleweed, and smell fox, an allusion to the musky smell of the leaves. It is a perennial herbaceous plant growing 5–15 cm (2–6 in) tall. 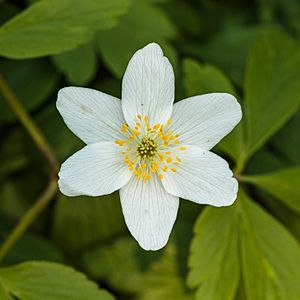 Anemonoides nemorosa is a rhizomatous herbaceous perennial plant less than 30 centimetres (12 in) in height. The compound basal leaves are palmate or ternate (divided into three lobes). They grow from underground root-like stems called rhizomes and die back down by mid summer (summer dormant).

The plants start blooming in spring, March to May in the British Isles soon after the foliage emerges from the ground. The flowers are solitary, held above the foliage on short stems, with a whorl of three palmate or palmately-lobed leaflike bracts beneath. The flowers are 2 centimetres (0.8 in) diameter, with six or seven (and on rare occasions eight to ten) tepals (petal-like segments) with many stamens. In the wild the flowers are usually white but may be pinkish, lilac or blue, and often have a darker tint on the backs of the tepals.

Wood sorrel Oxalis acetosella, which grows in similar shaded places, can be readily distinguished by its ternate and clover-like leaves and smaller flowers with 5 white petals and 5 sepals. 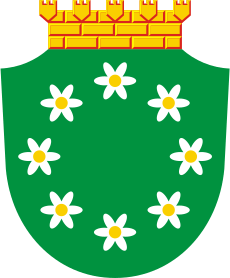 Eight A. nemorosas in the coat of arms of Raseborg

The native range of Anemonoides nemorosa extends across Europe to western Asia, reaching as far south as the Caucasus Mountains in Turkey. It has been introduced into New Zealand and elsewhere. In North America, there are naturalized populations at well-known sites in Newfoundland, Quebec, and Massachusetts.

A. nemorosa is often found in shady woods. The species is common in the British Isles but it spreads very slowly there, by as little as six feet per century, so it is often used as an indicator for ancient woodland. 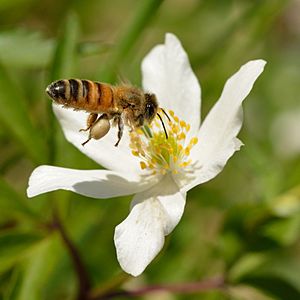 The flowers are pollinated by insects, especially hoverflies. The seeds are achenes.

Many cultivars have been selected for garden use, The RHS Plant Finder 2008–2009 lists 70 cultivars sold by nurseries in the UK. Some of the most widely available are: 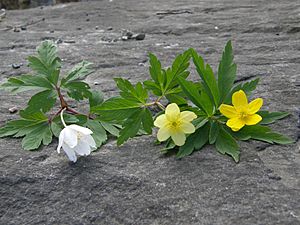 Those marked agm are recipients of the Royal Horticultural Society's Award of Garden Merit.

Anemonoides × lipsiensis, a hybrid between A. nemorosa and A. ranunculoides, has pale yellow flowers; A. × lipsiensis 'Pallida' is the best-known result of this cross. It has also been awarded the AGM.

All content from Kiddle encyclopedia articles (including the article images and facts) can be freely used under Attribution-ShareAlike license, unless stated otherwise. Cite this article:
Anemonoides nemorosa Facts for Kids. Kiddle Encyclopedia.