Buttercups are a large genus of flowering plants called Ranunculus. It has yellow, shiny petals, and grows wild in many places. It is poisonous to eat for humans and cattle, but when dry the poison is not active.

Plants of the commonly named buttercup family grow in many different variations but most can be identified by their yellow cupped flowers and free-growing habit. The plants often climb or sprawl, with leaves arranged in spirals. Some may contain leaves without stipules and flowers with many stamens.

Molecular investigation of the genus shows that Ranunculus is not monophyletic. Proposals are under way to split up the genus. 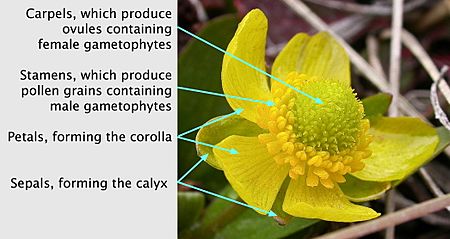 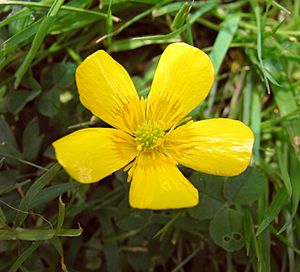 Highlights shining on the reflective petals of the buttercup can be seen in the images at left and above.

People sometimes hold a fresh buttercup flower under the chin of a friend or family member. If a yellow reflection from the flower's shiny petals can be seen under the chin, the person is said to "like butter". This custom is still taught to young children and shows how buttercup petals reflect light.

Some other plants and people are named buttercup, based on the name of the yellow wild flower. These include a type of pumpkin, and the girl's name Buttercup.

"Build Me Up Buttercup" was the name of a popular song by The Foundations during the 1960s. A song called "Buttercup" was released by Jack Stauber in 2017. A cartoon character from the Powerpuff Girls television series was also named Buttercup. Buttercups and their poisonous effect are used as a theme in the PC game Undertale.

All content from Kiddle encyclopedia articles (including the article images and facts) can be freely used under Attribution-ShareAlike license, unless stated otherwise. Cite this article:
Buttercup Facts for Kids. Kiddle Encyclopedia.