Lily of the Valley facts for kids 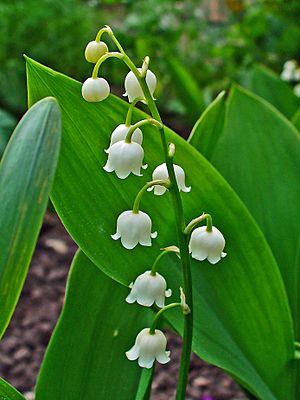 Lily of the Valley

Lily of the Valley is a flowering plant. It is found in the Northern Hemisphere in Asia and Europe. It is also in the southern Appalachian Mountains in the United States. The scientific name is Convallaria majalis.

Lily of the Valley is a herbaceous perennial plant. The flower has a sweet scent. The plant is highly poisonous. They bloom in late spring.

Convallaria majalis is a herbaceous perennial plant that forms extensive colonies by spreading underground stems called rhizomes. New upright shoots are formed at the ends of stolons in summer, these upright dormant stems are often called pips. These grow in the spring into new leafy shoots that still remain connected to the other shoots under ground, often forming extensive colonies. The stems grow to 15–30 cm tall, with one or two leaves 10–25 cm long; flowering stems have two leaves and a raceme of 5–15 flowers on the stem apex.

The flowers have six white tepals (rarely pink), fused at the base to form a bell-shape, 5–10 mm diameter, and sweetly scented; flowering is in late spring, in mild winters in the Northern Hemisphere it is in early March. The fruit is a small orange-red berry 5–7 mm diameter that contains a few large whitish to brownish colored seeds that dry to a clear translucent round bead 1–3 mm wide. Plants are self-sterile, and colonies consisting of a single clone do not set seed. 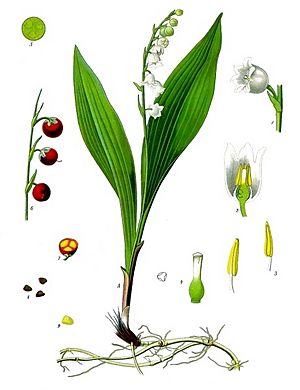 Convallaria majalis is a native of Europe, where it largely avoids the Mediterranean and Atlantic margins. An eastern variety, C. majalis var. keiskei occurs in Japan and parts of eastern Asia. A limited native population of C. majalis var. montana occurs in the Eastern United States. There is, however, some debate as to the native status of the American variety.

Like many perennial flowering plants, C. majalis exhibits dual reproductive modes by producing offspring asexually by vegetative means and by seed, produced via the fusion of gametes.

Convallaria majalis is a plant of partial shade, and mesophile type that prefers warm summers. It likes soils that are silty or sandy and acid to moderately alkaline, with preferably a plentiful amount of humus. The Royal Horticultural Society states that slightly alkaline soils are the most favoured. It is an Euroasiatic and suboceanic species that lives in mountains up to 1,500 m altitude.

Convallaria majalis is used as a food plant by the larvae of some moth and butterfly (Lepidoptera) species including the grey chi. Adults and larvae of the leaf beetle Lilioceris merdigera are also able to tolerate the cardenolides and thus feed on the leaves. 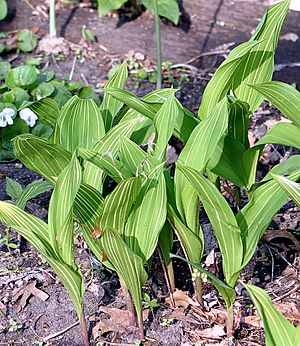 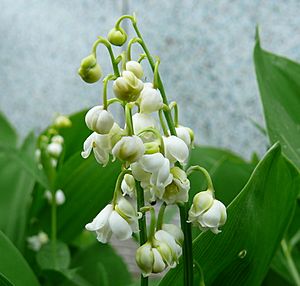 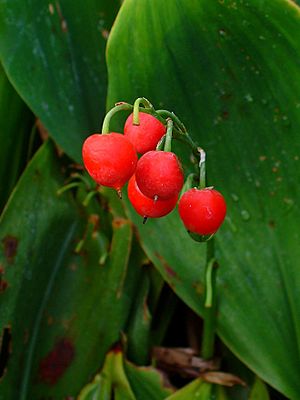 Convallaria majalis is widely grown in gardens for its scented flowers and ground-covering abilities in shady locations. It has gained the Royal Horticultural Society's Award of Garden Merit. (confirmed 2017). In favourable conditions it can form large colonies.

Various kinds and cultivars are grown, including those with double flowers, rose-colored flowers, variegated foliage and ones that grow larger than the typical species.

Traditionally Convallaria majalis has been grown in pots and winter forced to provide flowers during the winter months, both for as potted plants and as cut flowers.

All parts of the plant are highly poisonous, including the red berries which may be attractive to children. If ingested—even in small amounts—the plant can cause abdominal pain, vomiting, reduced heart rate, blurred vision, drowsiness, and red skin rashes.

The plant also contains saponins. Although deadly, the plant has been used as a folk remedy in moderate amounts, and is currently used by herbalists as a restricted herbal remedy. It also contains the unusual, poisonous amino acid azetidine-2-carboxylic acid.

The odor of lily of the valley, specifically the ligand bourgeonal, was thought to attract mammalian sperm. The 2003 discovery of this phenomenon prompted research into odor reception, but a 2012 study demonstrated instead that at high concentrations, bourgeonal imitated the role of progesterone in stimulating sperm to swim (chemotaxis), a process unrelated to odor reception.

In 1956, the French firm Dior produced a fragrance simulating lily of the valley, which was Christian Dior's favorite flower. Diorissimo was designed by Edmond Roudnitska. Although it has since been reformulated, it is considered a classic.

Other perfumes imitating or based on the flower include Henri Robert's Muguet de Bois (1936), Penhaligon's Lily of the Valley (1976), and Olivia Giacobetti's En Passant (2000).

Weddings and other celebrations 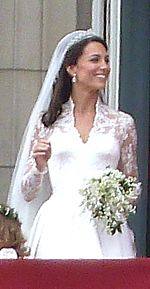 Duchess of Cambridge with bridal bouquet featuring lily of the valley

At the beginning of the 20th century, it became tradition in France to sell lily of the valley on international labour day, 1 May (also called La Fête du Muguet (Lily of the Valley Day) by labour organisations and private persons without paying sales tax (on that day only) as a symbol of spring.

Lily of the valley is worn in Helston (Cornwall, UK) on Flora Day (8 May each year, see Furry Dance) representing the coming of "the May-o" and the summer. There is also a song sung in pubs around Cornwall (and on Flora Day in Cadwith, near Helston) called "Lily of the Valley"; the song, strangely, came from the Jubilee Singers from Fisk University in Nashville, Tennessee.

Lily of the valley was the floral emblem of Yugoslavia, and it also became the national flower of Finland in 1967.

The Norwegian municipality Lunner has a lily of the valley on its coat-of-arms.

Lily of the valley is the birth flower for the month of May. It represents humility, chastity, sweetness, and purity.

Its scientific name, majalis or maialis, means "of or belonging to May", and old astrological books place the plant under the dominion of Mercury, since Maia, the daughter of Atlas, was the mother of Mercury or Hermes.

In terms of musical influence, “Lily of the Valley” is also a song by Queen on their album Sheer Heart Attack.

Two of the flower's alternative names — Our Lady's tears and Mary's tears — derive from Christian legends that it sprang from the weeping of the Virgin Mary during the crucifixion of Jesus. Other etiologies have its coming into being from Eve's tears after she was driven with Adam from the Garden of Eden or from the blood shed by Saint Leonard of Noblac during his battles with a dragon.

The name "lily of the valley" is used in some English translations of the Bible in Song of Songs 2:1, but the Hebrew phrase "shoshannat-ha-amaqim" in the original text (literally "lily of the valleys") does not refer to this plant. It is possible, though, that the biblical phrase may have had something to do with the origin or development of the modern plant-name.

It is a symbol of humility in religious painting. Lily of the valley is considered the sign of Christ's second coming. The power of people to envision a better world was also attributed to the lily of the valley.

All content from Kiddle encyclopedia articles (including the article images and facts) can be freely used under Attribution-ShareAlike license, unless stated otherwise. Cite this article:
Lily of the Valley Facts for Kids. Kiddle Encyclopedia.