Burley in Wharfedale facts for kids

Burley-in-Wharfedale is a village and civil parish in the county of West Yorkshire, England, and is situated within the Wharfedale valley.

The village is situated on the A65 road, approximately 11 miles (18 km) north-west from Leeds city centre, 8 miles (13 km) north from Bradford, 3 miles (5 km) from the spa town of Ilkley and 2 miles (3 km) from the market town of Otley. The hamlet of Burley Woodhead, a cluster of farms and homes at the foot of Burley Moor, is 1 mile (1.6 km) to the south-west.

Originally a small agricultural community with likely Roman and Anglo-Saxon roots, Burley developed in the late 18th and 19th centuries into an industrial village with many residents employed at Greenholme Mills, cotton mills powered from a goit fed from the River Wharfe. The cotton mill no longer operates, but the goit is now utilised to provide hydro electric power, and a weir remains.

The development of industrial and commercial centres in the nearby cities of Leeds and Bradford, combined with rail and bus links, caused major changes to the village in the early 20th century. Council housing was built in the 1920s and 1950s, as the village became a dormitory settlement for the two cities. With developments in the second half of the 20th century, Burley became a prosperous but socially diverse village. The village has a high percentage of elderly and retired people, and young families attracted by job opportunities, local schools and new housing developments.

In 2006, following a petition to the local authority and permission from the Secretary of State, Burley gained its own Parish Council. 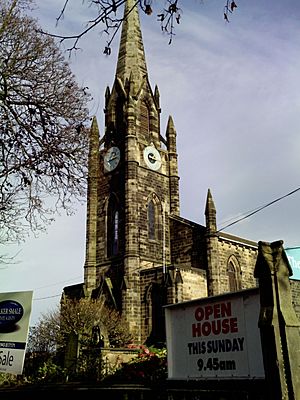 The Parish Church of St Mary's

Burley population is 7,338. With Menston, Burley is part of Wharfedale Ward in the metropolitan borough of the City of Bradford.

The village contains a range of local businesses. Burley public buildings include the Queens' Hall, originally built as a lecture hall for mill workers. Recent work by community groups has resulted in developments including a new nature reserve, and the village green which contains a central water feature.

The village has two state primary schools, Burley and Woodhead Primary School, Burley Oaks Primary School, and Ghyll Royd School & Pre-School, a private primary and nursery school for girls and boys aged 2–11. The school was established in 1889 by Augustus Wooldridge Godby. Formerly an all boys school, it became a co-educational school in 1999 when it moved location to Greystone Manor.

Burley churches are those for Anglicans, Calvinists, Methodists, and Catholics. The Anglican Parish Church is dedicated to St Mary.

Burley has a range of housing types and age, and terrace houses and cottages at the centre. The former hospital was converted into private townhouses and flats.

Burley has a railway station on the Wharfedale Line, with direct trains to Leeds, Bradford and Ilkley, and links to other local urban areas.

All content from Kiddle encyclopedia articles (including the article images and facts) can be freely used under Attribution-ShareAlike license, unless stated otherwise. Cite this article:
Burley in Wharfedale Facts for Kids. Kiddle Encyclopedia.