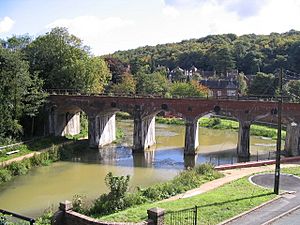 The Upper Furnace Pool of the Coalbrookdale foundries. It provided water to power the bellows for the blast furnaces, and the turning and grinding machines. The railway viaduct was built in 1862-64, and still carries trains taking coal to the Ironbridge power station. 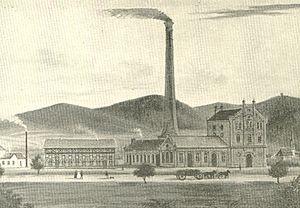 New factories, built during industrialization. This is a drawing made around 1860. 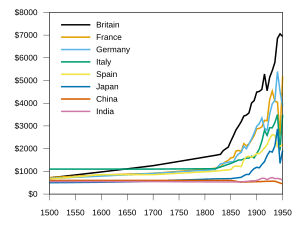 The effect of Industrialisation shown by rising income levels since 1500. The graph shows the gross domestic product (at purchasing power parity) per head between 1500 and 1950 in 1990 International dollars for selected nations.

Industrialization is part of a process where people adopt easier and cheaper ways to make things. Using better technology, it becomes possible to produce more goods in a shorter amount of time. A single person can produce more things.

After industrialization people also do more specialized jobs. For example before industrialization, a cobbler made the whole shoe. He worked on one pair of shoes, finished that, and then did the next pair of shoes. With industrialization, there are many people involved in making shoes. An individual shoemaker has a smaller task, however. There is one person that cuts the sole of the shoe. Another person stitches it on. In short there is division of labour. The machines to make the shoes cost a lot of money so the factory will be owned by a rich person who can afford the machines.

All content from Kiddle encyclopedia articles (including the article images and facts) can be freely used under Attribution-ShareAlike license, unless stated otherwise. Cite this article:
Industrialization Facts for Kids. Kiddle Encyclopedia.