Kids Encyclopedia Facts
Not to be confused with Burley in Wharfedale.

Burley is an inner city area of Leeds, West Yorkshire, England, 1 mile (1.6 km) north-west of Leeds city centre, between the A65 Kirkstall Road at the south and Headingley at the north, in the Kirkstall ward. 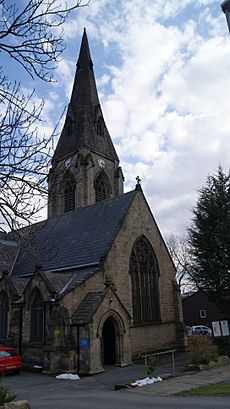 The place-name 'Burley' is first attested in 1195 as "Burteg" and, around 1200, as "Burcheleia" which is more representative of other medieval attestations. The name derives from Old English burh, a 'fortification' and lēah an 'open space'.

Burley grew from a village in the late industrial revolution. Parts of the original village can still be seen at the junction of Burley Road and Haddon Road, and around Burley Lodge. Most houses constructed in Burley were of red-brick, but were generally smaller and largely back-to-backs. Industrial and commercial buildings were also largely brick-built. There are some larger stone-built buildings on Kirkstall Road such as the ornate Cardigan Arms public house—although this largely pre-dates most of the buildings in the area—which at the time of its construction only Burley Village existed, with the Arms somewhat outside.

Mills along the River Aire were built towards the end of the 19th century, some of which remain standing. Housing for mill workers and others in surrounding areas followed, and homes were built further up the bank. Other industries in the area included printing, clock-making, dairies and chemicals.

The area remained working class for many decades[quantify] but the growth of the University of Leeds and Leeds Metropolitan University in the late 20th century brought a growing student population to Burley and the surrounding areas of Hyde Park, and Headingley. In the mid- to late 2000s student halls were built along the lower parts of Burley Road.

The railway came to Burley with the opening of the Harrogate Line in 1848. Burley however did not get a station until 1988; until then the nearest was Headingley railway station. 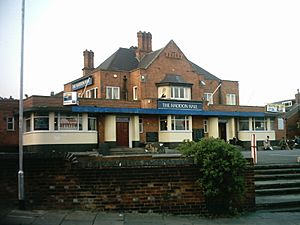 The Haddon Hall public house in Burley was used for the filming of the Beiderbecke Tapes.

Burley public houses and members' clubs include The Cardigan Arms, Bridgewater Arms, The Merry Monk, Burley Social Club and Burley Conservative Club. There are three gyms, a 5-aside football centre and a nine-hole golf course.

The area is served by small supermarkets (Iceland, Asda, Co-op and Aldi), and small chains such as One-Stop, Costcutter and Premier. The main shopping area is on Kirkstall Road and Burley Hill where there are shops and restaurants. Cardigan Fields leisure park complex contains a multi-screen cinema, a nightclub, a gymnasium, a 10-pin Bowling, a public house, and an ALDI supermarket. Restaurants include Pizza Hut, McDonald's and Nando's.

The Leeds and Liverpool Canal and River Aire form Burley's southern boundary, and are popular with walkers, cyclists and fishermen.

Burley Model Allotments, in what was once a quarry, has more than 100 plots and is bisected by Beechwood Crescent. The allotments have existed since 26 August 1892 when Leeds City Council acquired the site. It was replanned in 1956 and 1957 and on 26 June 1958 they were re-opened as Burley Model Allotments by the Lord Mayor of Leeds.

St Matthias' church is situated to the south-east of the old village. Built in 1854, it is a stone church with spire, and was designated a Grade II listed building on 5 August 1976.

Local artists open their homes as galleries to display their work as part of Triangle Art Day. 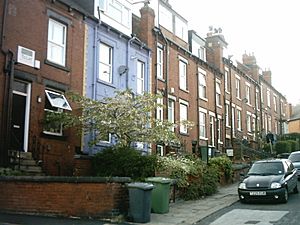 Burley is characterised by red brick Victorian terraces including small back-to-back houses and through terraces. In the 20th century private houses were built including semi-detached houses around the Burley Wood. There are pockets of 20th-century council houses including a small estate of prefabricated concrete houses on Burley Road near the Yorkshire Television studios and an estate closer to Kirkstall.

Burley has a student population in private rented accommodation and in the mid- to late 2000s large scale student halls were built on Burley Road and owned and operated by the Opal Group.

Burley is linked to Leeds city centre by the A65 and Burley Roads. The railway came to Burley with the opening of the Harrogate Line in 1848 but Burley Park railway station was only opened in 1988; until then the nearest station was Headingley railway station. The station connects Burley with the city centre, Headingley, Horsforth, Harrogate, Knaresborough and York. First Leeds' 15, 19, 19A, 33, 33A, 49, 50 and 50A bus services link Burley with the city centre, Bradford, Farsley, Horsforth, Ireland Wood, Tinshill, Kirkstall, Headingley, Bramley, Garforth, Guiseley, Menston, Otley, St James' Hospital and Seacroft. Until 1959 the Leeds Tramway ran through Burley.

Burley was the setting for the television drama Harry's Game, in which houses on Burley Road were portrayed to be Belfast which Yorkshire Television considered too dangerous to use for filming. The Haddon Hall public house was used for filming in the Beiderbecke Tapes. Burley Park railway station is sometimes used as Hotton railway station in Yorkshire Television soap opera Emmerdale. Occasional scenes from Fat Friends were shot in Burley.

Queens ARLFC play in the Pennine League Premier Division and have headquarters at Burley Social Club. Burley United play their games at West Park football fields, playing in Division 1 of the Sunday League. Burley RUFC play in Yorkshire Division 4 and play their matches next to Kirkstall Abbey.

Burley is home to Andy McVeigh (aka the Burley Banksy), an artist who brightens up electric boxes around the community with original murals. His art now appears across the city, usually themed around homages to Leeds United Football Club.

All content from Kiddle encyclopedia articles (including the article images and facts) can be freely used under Attribution-ShareAlike license, unless stated otherwise. Cite this article:
Burley, Leeds Facts for Kids. Kiddle Encyclopedia.