City of Leeds facts for kids

The City of Leeds is a city and metropolitan borough in West Yorkshire, England. The metropolitan borough includes the administrative centre of Leeds and the towns of Farsley, Garforth, Guiseley, Horsforth, Morley, Otley, Pudsey, Rothwell, Wetherby and Yeadon. It has a population of (2005 est.), making it technically the second largest city in England by population behind Birmingham, since London is not a single local government entity. It is governed by Leeds City Council.

The current city boundaries were set on 1 April 1974 by the provisions of the Local Government Act 1972, as part a reform of local government in England. The city is a merger of eleven former local government districts; the unitary City and County Borough of Leeds combined with the municipal boroughs of Morley and Pudsey, the urban districts of Aireborough, Garforth, Horsforth, Otley and Rothwell, and parts of the rural districts of Tadcaster, Wharfedale and Wetherby from the West Riding of Yorkshire.

For its first 12 years the city had a two-tier system of local government; Leeds City Council shared power with West Yorkshire County Council. Since the Local Government Act 1985 Leeds City Council has effectively been a unitary authority, serving as the sole executive, deliberative and legislative body responsible for local policy, setting council tax, and allocating budget in the city, and is a member of the Leeds City Region Partnership. The City of Leeds is divided into 31 civil parishes and a single unparished area.

Main pages: History of Leeds and County Borough of Leeds

The Borough of Leeds was created in 1207, when Maurice Paynel, lord of the manor, granted a charter covering a small area adjacent to a crossing of the River Aire, between the old settlement centred on Leeds Parish Church to the east and the manor house and mills to the west. In 1626 a charter was granted by Charles I, incorporating the entire parish as the Borough of Leeds; it was reformed by the Municipal Corporations Act 1835. The parish and borough included the chapelries of Chapel Allerton, Armley, Beeston, Bramley, Farnley, Headingley cum Burley, Holbeck, Hunslet, Leeds, Potternewton and Wortley. The borough was located in the West Riding of Yorkshire and gained city status in 1893. When a county council was formed for the riding in 1889, Leeds was excluded from its area of responsibility and formed a county borough. The borough made a significant number of territorial expansions, expanding from 21,593 acres (87.38 km2) in 1911 to 40,612 acres (164.35 km2) in 1961; adding in stages the former area of the Roundhay, Seacroft, Shadwell and Middleton parishes and gaining other parts of adjacent districts.

A review of local government arrangements completed in 1969 proposed the creation of a new large district centred on Leeds, occupying 317,000 acres (1,280 km2) and including 840,000 people. The proposed area was significantly reduced in a 1971 white paper; and within a year every local authority to be incorporated into it protested or demonstrated. The final proposal reduced the area further and following the enactment of the Local Government Act 1972, the county borough was abolished on 1 April 1974 and its former area was combined with that of the municipal boroughs of Morley and Pudsey; the urban districts of Aireborough, Horsforth, Otley, Garforth and Rothwell; and parts of the rural districts of Tadcaster, Wetherby and Wharfedale. The new district gained both borough and city status, as had been held by the county borough; and forms part of the county of West Yorkshire.

The district and its settlements are situated in the eastern foothills of the Pennines astride the River Aire whose valley, the Aire Gap, provides a road and rail corridor that facilitates communications with cities to the west of the Pennines. The district extends 15 miles (24 km) from east to west and 13 miles (21 km) from north to south; with over 65% covered with green belt land. The highest point, at 1,115 feet (340 m), is at its north western extremity on the eastern slopes of Rombalds Moor, better known as Ilkley Moor, on the boundary with the City of Bradford. The lowest points are at around 33 feet (10 m), in the east: where River Wharfe crosses the boundary with North Yorkshire south of Thorp Arch Trading Estate and where the River Aire (at this point forming the City of Wakefield boundary) meets the North Yorkshire boundary near Fairburn Ings. To the north and east Leeds is bordered by North Yorkshire: Harrogate district to the north and Selby district to the east. The remaining borders are with other districts of West Yorkshire: Wakefield to the south, Kirklees to the south west, and Bradford to the west. 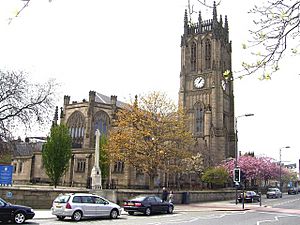 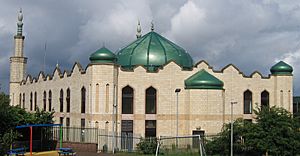 The majority of people in Leeds identify themselves as Christian. The proportion of Muslims is around National average. Leeds has the third-largest Jewish community in the United Kingdom, after those of London and Manchester. The areas of Alwoodley and Moortown contain sizeable Jewish populations. 16.8% of Leeds residents in the 2001 census declared themselves as having "no religion", which is broadly in line with the figure for the whole of the UK (also 8.1% "religion not stated").

The crime rate in Leeds is well above the national average, like many other English major cities. In July 2006, the think tank Reform calculated rates of crime for different offences and has related this to populations of major urban areas (defined as towns over 100,000 population). Leeds was 11th in this rating (excluding London boroughs, 23rd including London boroughs).

Leeds city centre is connected to the National Rail network at Leeds railway station. Public transport in West Yorkshire is coordinated by the West Yorkshire Passenger Transport Executive, under the control of a joint-board of local authorities in the county and including Leeds City Council.

The City has several twinning or partnership arrangements:

The city also has "strong contacts" with the following cities "for the purposes of ongoing projects": 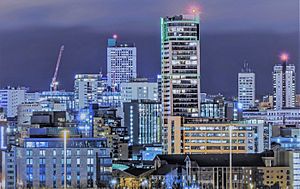 Leeds has a diverse economy with the service sector now dominating over the traditional manufacturing industries. It is the location of one of the largest financial centres in England outside London. New tertiary industries such as retail, call centres, offices and media have contributed to a high rate of economic growth. This is a chart of trend of regional gross value added of Leeds at current basic prices with figures in millions of pounds.

All content from Kiddle encyclopedia articles (including the article images and facts) can be freely used under Attribution-ShareAlike license, unless stated otherwise. Cite this article:
City of Leeds Facts for Kids. Kiddle Encyclopedia.