Clifford is a small village in the City of Leeds, West Yorkshire, England. the population at the 2011 Census was 1,662. The village is 3 miles (5 km) south of Wetherby. Many of the older buildings are built of magnesian limestone.

The village of Clifford takes its name from Clyf' and ford Old English for ford at the bank or cliff, referring to the crossing of the River Wharfe at Boston Spa which was then within the manor. Clifford is mentioned in the Domesday Book, when Ligulf held the manor of six carucates with four ploughs.

Clifford was originally a farming community, but in the 1831, the corn mills, powered by Bramham Beck, on Old Mill Lane were transformed into flax mills, making patent yarn and shoe thread. The mills were owned by the Grimston Brothers. At its height the business employed about 300 workers, some of them Irish immigrants, and many of whom lived in the stone terraced cottages in the village.

Clifford is a rural village, with a conservation area at its centre. It has a mix of buildings from traditional magnesian limestone cottages to modern family housing. All construction within the conservation area must use local limestone. Green Belt land separates the village from Bramham and Boston Spa. Limestone for building was quarried locally.

The A1(M) and M1 motorway are just over a mile away. Bus services coordinated by West Yorkshire Passenger Transport Executive go to Tadcaster, Leeds, Harrogate, Wetherby and Wakefield. 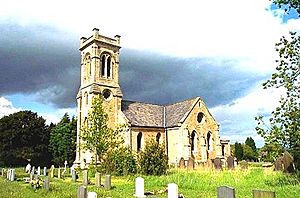 There are three churches in Clifford. The Anglican church dedicated to St Luke on high ground at the western end of the village is built in the Gothic style of architecture and was consecrated by the Archbishop of York in 1842. The church cost £1200 raised by subscription and the site was donated by George Lane-Fox. The Wesleyan Methodists built a chapel, and the Roman Catholics built St Edward King and Confessor Catholic Church. to serve the population of Irish workers that came to work in Grimstons flax mill established in the village in 1831. The Grimston, Clifford and Vavasour families contributed to the cost of building the church.

Clifford has a monthly magazine, The Outlook, that is delivered free to every resident by the committee.

All content from Kiddle encyclopedia articles (including the article images and facts) can be freely used under Attribution-ShareAlike license, unless stated otherwise. Cite this article:
Clifford, West Yorkshire Facts for Kids. Kiddle Encyclopedia.