The church was built to serve the population of Irish workers that came to work in the flax mill owned by the Grimston Brothers that was established in the village in 1831. The Grimstons, Cliffords and Vavasour families contributed to the cost of building the church. It was built in the Romanesque style by J.A. Hansom to designs by Ramsay between 1845 and 1848. The tower was built to designs by George Goldie and completed in 1866-7. It was built on the site of a former Wesleyan Chapel, hence its location on Chapel Lane, where it joins the High Street.

There is a three-bay arcade under the west organ gallery in the tower. The aisle arcades have plain cylindrical piers and octagonal capitals to round arches. The three eastern bays form the sanctuary. 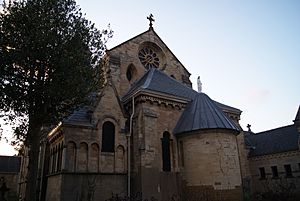 The rear of the church

The church is built in ashlar Magnesian Limestone and has a green slate roof in the Romanesque style. There is a seven bay aisled nave and chancel with small east Lady Chapel and a five-stage west tower with buttresses to the fourth stage. At the southwest corner of the tower there is a square stair-turret which becomes cylindrical after the second stage and has a conical roof above the fifth stage. The base of the tower is open to the first stage and has round arches on three sides. The tower has a pyramidal ashlar roof with a finial. The vestry is on the north side and on the south side there is a chapel.

The churchyard contains a war grave of an Army Air Corps soldier of World War II.

All content from Kiddle encyclopedia articles (including the article images and facts) can be freely used under Attribution-ShareAlike license, unless stated otherwise. Cite this article:
St Edward King and Confessor Catholic Church, Clifford Facts for Kids. Kiddle Encyclopedia.