Yeadon is a town within the metropolitan borough of the City of Leeds, West Yorkshire, England.

The majority of the town sits in the Otley and Yeadon ward of Leeds City Council and the Leeds North West parliamentary constituency. A southern part of the town (the area north of Swincar Avenue on Kirk Lane and south of the A65) is situated in the Guiseley and Rawdon ward and the Pudsey constituency.

At the time of the Anglo-Saxons in the early 7th century AD much of the Aire valley was still heavily wooded, although perhaps Yeadon stood out above the tree line. The place name is probably derived from two Old English words meaning "high hill", as -don is derived from an Anglo-Saxon word for hill.

Between 675 and 725 AD there was a Christian settlement in Airedale and other Norse settlements followed. Viking settlers called the highest point in the area Yeadon Haw. The suffix haw appears to have been tautological, as it was likely derived from the Old Norse haugr, which also means "hill". When the Domesday Book was compiled, Rawdon, Horsforth and Yeadon were classified as Terra Regis—land owned by the king.

Historically a part of the West Riding of Yorkshire, Yeadon was formed out of Guiseley in 1845. It was a centre of woollen manufactures in the 19th century, particularly noted for its women's apparel. Its board of health was established in 1863. It had a cattle fair every year on the first Monday in April and the Yeadon Feast in the third week of August, which was held on Albert Square at the top of the High Street. The fair continued until the early 1980s, when housing for the elderly was built on the site.

In chronostratigraphy, the term Yeadonian—for a British sub-stage of the Carboniferous period—is derived from the study of a geological site at the brick and tile works in Yeadon.

Yeadon had a rail connection from Guiseley which opened in 1894. The line was closed in 1964. It is now a nature path and most of its length can still be walked, from the Old Engine Fields, off Henshaw Lane down Guiseley retail park where it joined the Guiseley Branch Line. The line continued over Henshaw Lane where an old bridge can still be seen. Immediately after the bridge was the railway station, near the Station Inn in the (now) council storage yard. The line terminated opposite Trinity Church (previously Benton Congregational Church) in Rawdon. Yeadon Station was mostly used for goods, and the line served several large mills directly along its route (Leafield Mill, Kirk Lane Mill, Westfield Mill, Green Lane Mill, a soap works and a dye works). The only passenger trains were special services. The first train to leave Yeadon Station in 1905 held 500 people. The following year, trains took passengers from Yeadon to Blackpool. 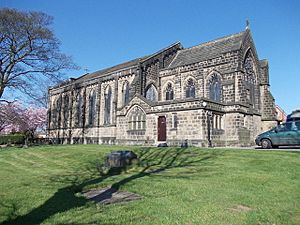 Yeadon was part of the old, large Guiseley Parish but a church, St. John the Evangelist Church, was built in 1844. St. John's is a Commissioners' church built with a grant of £300. It was designed by Walker Rawsthorne. There is also a Roman Catholic church (St Peter and St Paul) and Methodist Church. 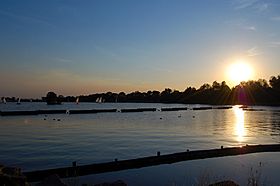 Yeadon is northwest of Leeds, at one of the highest points of the city, making it an unusual location for an airport. Yeadon Tarn (also known as Yeadon Dam) is located between High Street and the airport runway. During the Second World War it was drained to prevent enemy aircraft using its reflection as a landmark to identify the nearby Avro factory. The tarn is used for sailing and fishing. Mallard ducks, swans and a sizable population of Canada geese can be found at the tarn. There is a BMX bike track adjacent to it, with competitions held in the summer.

The national charity Epilepsy Action has its headquarters in the town.

Yeadon has a developed town centre and most of the businesses are situated around the High Street. There is a Morrisons supermarket as well as several other chains of shops, such as KC's Express (est. 1994). There are also building societies, estate agents and public houses. There are also both Travelodge and Premier Travel Inn hotels situated near the airport.

Avro had a factory next to Yeadon Aerodrome from 1938 to 1946 which produced many of the company's wartime planes, including the Lancaster, Lincoln, York and Anson. Approximately 700 Lancasters were produced at Yeadon.

Aviation heritage in Yeadon is kept alive by the activities of 2168 (Yeadon) Squadron Air Training Corps.

The national charity Epilepsy Action has its headquarters in the town.

Cricket has been played in Yeadon at least since around 1850 when scores of people were reported to play on Yeadon Moor after work ended on a Saturday teatime. Play continued as long as the light would allow. The origins of cricket in Yeadon are not definitely known, but at that time Yeadon boasted two teams, Topenders and Lowenders. The two teams decided to amalgamate at a meeting held in the Old Victoria Hotel, at the junction of Sandy Way and the Green, in 1859. The newly amalgamated club adopted the name Yeadon United Cricket Club, ‘united’ being dropped some time later.

The legendary W. G. Grace played at the Swan ground in 1877 with a United South XI. Grace was bowled for nought by an elated bowler who was then admonished by his captain for removing the man the crowd had paid to see. 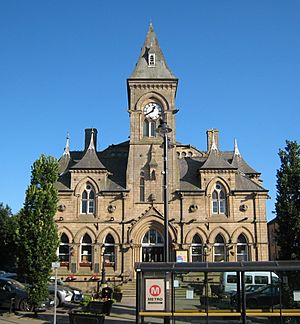 Facing North on Town Hall Square by the High Street, and originally built as the Yeadon Town Hall and Mechanics' Institute in 1880 by William Hill of Leeds, it is a Grade II listed building of coursed dressed sandstone, with slate roofs in French Gothic style, featuring a central tower with a clock. The architect was selected after a competition with more than 200 entries, with a budget of £5,000. The stone mason was Richard Hogg of Rawdon.

The building was used as a registrar's office in the Yorkshire Television programme The Beiderbecke Tapes in 1985. 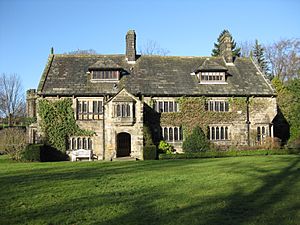 Arthur Mee wrote "Though Yorkshire has many greater houses, it has few more charming than Low Hall on the fringe of Yeadon." It is a Grade II listed building on Gill Lane, a former 17th century farmhouse (with a datestone "W S 1658"), remodelled in the 19th century, of coursed sandstone and slate roof. It was built in 1624, and has a porch added by William Sale in 1658, believed to be taken from Esholt Priory following the Dissolution of the Monasteries. It contains a Tudor Priest hole. 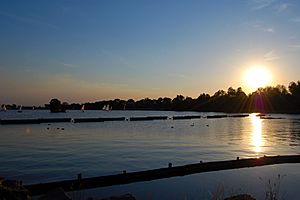 Yeadon Tarn (also known as Yeadon Dam) is located between High Street and the airport runway. During the Second World War it was drained to prevent enemy aircraft using its reflection as a landmark to identify the nearby Avro factory. The tarn is used for sailing and fishing. Mallard ducks, swans and a sizable population of Canada geese can be found at the tarn. Adjacent to the tarn is a park of 17 acres (6.9 ha) with a BMX bike track, known as Tarnfield Park.

All content from Kiddle encyclopedia articles (including the article images and facts) can be freely used under Attribution-ShareAlike license, unless stated otherwise. Cite this article:
Yeadon, West Yorkshire Facts for Kids. Kiddle Encyclopedia.