Rawdon is a village and civil parish in the metropolitan borough of the City of Leeds, West Yorkshire, England. It sits on the River Aire and on the A65 south of Yeadon.

The northern parts of the village are part of the Guiseley and Rawdon ward of Leeds City Council and the southern part in the Horsforth ward. The whole village is included in the Pudsey parliamentary constituency.

With William the Conqueror was a commander of archers named Paulyn who rendered such faithful and courageous service to the Norman cause that he was rewarded with lands, a portion of which was the manor on Rawden Hill. Granting manors to military leaders was more than a matter of largesse on William’s part. It was the medieval method of controlling newly conquered countries. For Paulyn, as for scores of other new lords of new manors, it meant a continuing obligation to the new ruler, but it also meant a near guarantee of prosperity by means of a new family seat and the control over fiefdom.

At the time of invasion, Paulyn, in common with his peers, had no true surname, or family name. Surnames were not yet necessary to distinguish one man from another. In fact, it seems that the first real use of the surname came about because of the Norman invaders’ need to know how much land they controlled and what the value of the land was. To determine this, a census, called the Domesday Survey, was taken of the 5,500-or-so land-holding knights and each was identified with a surname.

If Paulyn was still alive when the Domesday Survey was made, we assume that he received his surname – taken from the place-name Rawden (as it was spelled at that time). He is generally referred to as Paulyn de Rawden, meaning simply Paulyn of Rawden Hill Manor.

“Rawden” means in Old English “rough valley.” The manor, or tract of land, on the hill near the “rough valley” awarded to Paulyn was on the River Aire in the former Urban District of Aireborough in Yorkshire, England’s largest county. Rawdon, as it is spelled nowadays, is a quiet residential village with a fine view of Aire valley.

Rawdon Billing is a hill and well known local landmark that can be seen from a considerable distance.

There are many other places throughout the UK known as Little London. 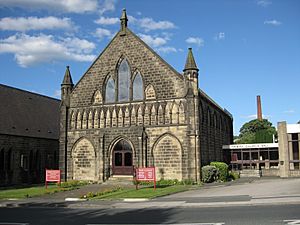 Rawdon is home to St Peter's Church which was built by Francis Layton as a chapel of ease for the parish of Guiseley in 1645. Due to the troubled times (English Civil War 1642–1651, then Cromwell's Commonwealth until the Restoration of the Monarchy in 1660) it took many years to erect the church. Francis Layton died in 1661, leaving his son Henry to continue with the building. It was finally consecrated in 1684. A tower was added in 1707. The church was largely rebuilt in 1864 by architect Alexander Crawford at a cost of £1,200.

Rawdon is also home to a Quaker meeting house built in 1697, and the Trinity Church (Baptist, Methodist, United Reform). This is housed in the former Benton Congregational Church (1846), being renamed in 1972 by the three groups who now share it.

All content from Kiddle encyclopedia articles (including the article images and facts) can be freely used under Attribution-ShareAlike license, unless stated otherwise. Cite this article:
Rawdon, West Yorkshire Facts for Kids. Kiddle Encyclopedia.