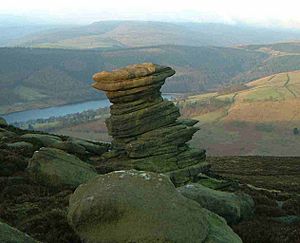 The Salt Cellar, a gritstone tor on Derwent Edge in the Peak District, England

Gritstone or grit is a hard, coarse-grained, siliceous sandstone. This term is especially applied to sandstones quarried for building material.

British gritstone was used for millstones to mill flour, to grind wood into pulp for paper and for grindstones to sharpen blades. "Grit" is often applied to sandstones with angular sand grains. It may commonly contain small pebbles or breccia.

Millstone Grit is an informal term for gritstones found in the Peak District and Pennines of northern England. These sediments were laid down in the late (upper) Paleozoic era, in the Carboniferous period, in deltaic conditions. The Millstone Grit Group is a formal stratigraphic term for this sequence of rocks.

All content from Kiddle encyclopedia articles (including the article images and facts) can be freely used under Attribution-ShareAlike license, unless stated otherwise. Cite this article:
Gritstone Facts for Kids. Kiddle Encyclopedia.