Rothwell is a town in the south-east of the City of Leeds metropolitan borough in West Yorkshire, England. It is situated between Leeds and Wakefield.

It is in the Rothwell ward of Leeds City Council and Elmet and Rothwell parliamentary constituency. Rothwell is part of the West Yorkshire Urban Area. 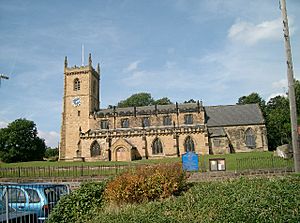 One of the royal lodge's documented owners was John of Gaunt, 1st Duke of Lancaster, who is supposed to have killed the last wild boar in England while hunting nearby

John Blenkinsop (1783–1831), is buried at Holy Trinity Church. He was a pioneer in the use of steam locomotives on the nearby Middleton Railway. 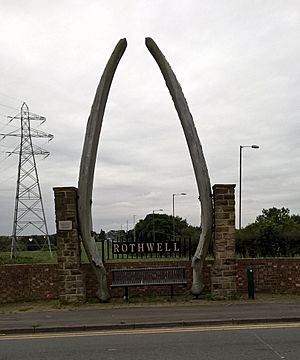 The town was granted the rights of a market town in the 15th century and a twice yearly fair. The tradition of a fair is maintained by the annual carnival which is organised by the Rothwell Entertainments Committee. May Day is celebrated beside the stone cross and on the Pastures on the first Monday Bank Holiday in May, while Rothwell Carnival is held in Springhead Park on the second Saturday of July every year.

An arch made of whale jawbones has marked the northern boundary by the junction with Wood Lane and the A61 road for over 100 years.

Rothwell is part of the historic Rhubarb Triangle, with the town and surrounding areas famed for having once produced 90% of the world's winter forced rhubarb from the forcing sheds that were common across the fields there. 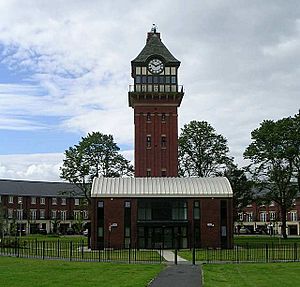 St George's Hospital was situated off Wood Lane where now exists Castle Lodge Avenue and associated houses. It was built in 1903 to a design by Leeds architect Edward J. Dodgshun by the Rothwell, Methley and Hunslet Joint Isolation Hospital Committee which was formed under the Isolation Hospitals Act 1893 by an order of the West Riding County Council 10 January 1900. When first constructed it was known as the New Union Workhouse and Infirmary for the Hunslet Union, On being taken over by the Leeds Public Assistance Committee in 1934 it was renamed St George’s Hospital. In 1934 it was transferred to the Leeds Health Committee. In 1948, the hospital was managed by the Leeds Group B Hospital Management Committee. After local government reorganisation in 1974 it was transferred to the Leeds Eastern District and soon after to the Leeds Western District. The hospital was closed in December 1991. From 1934 the hospital provided accommodation for the elderly ill, patients with chronic and acute mental illness, persons with learning disabilities, a maternity ward and a separate isolation ward. The site was developed for housing at the start of the 21st century but the original tall clock tower remains.

Rothwell Temperance Band is a Championship section brass band founded in Rothwell in 1984. Although they do not rehearse in Rothwell itself, they have strong connections with the town and hold many concerts for the local community. They actually rehearse in Wakefield. The closest Champion Section Brass Band is the Yorkshire Imperial Urquhart Travel Band, formerly of the Yorkshire Imperial Copperworks based in Stourton, from which the band is named. The Imps, as they are more commonly known, merged with the original Rothwell Band (founded 1881) in the 1990s.

Rothwell has a long history of coal mining. It was a site of early mining, using a system known as Bell Pits. Coal mining has been carried out in the area for over 600 years, though coal production stopped on 9 December 1983.

Rothwell was constituted an urban district in the West Riding of Yorkshire under the Local Government Act 1894. In 1937 it was expanded by taking in the Methley urban district and Hunslet Rural District.

Between 1894 and 1972, Rothwell was constituted as an urban district. This district included the areas of Rothwell, Methley, Oulton, Woodlesford, Stourton, Carlton, Robin Hood, Lofthouse and Thorpe. The Rothwell Urban District had a total population of around 25,000, but if it still existed today, that figure would be closer to 30,000. In 1972 these areas were taken into the newly formed City of Leeds Metropolitan District, although Thorpe, Lofthouse, Carlton and some parts of Robin Hood have a Wakefield postcode.

Rothwell has a town centre, including high street chains as well as independent boutique shops.

Besides the two annual fairs, a Christmas Fayre takes place in the autumn, and a food and drink fayre in early spring.

Since 2007, the town centre has experienced a major redevelopment to respect the local area's conservation status , pedestrianising and restoring the original route of Commercial Street.

The ancient parish of Rothwell: historical and genealogical information at GENUKI.

There are several primary schools in Rothwell including:

There are two high schools in the Rothwell area:

Both Royds and Rodillian have sixth form colleges integrated in the school environment.

Other further education colleges in Rothwell:

Rothwell is home to 3 football clubs:

There are numerous teams in the wider Rothwell ward, these include; Carlton Athletic and Robin Hood Athletic, among others.

Oulton Hall golf course, which is currently owned by hotel group De Vere is located adjacent to Oulton Lane. The only 5-star golf resort in the North of England.

Bowls or bowling is also a popular sport, and there is a public bowling green in Springhead Park.

There are four tennis courts located at Springhead Park. The courts are free to book and also offer paid for tennis coaching sessions too.

Rothwell Squash & Racketball Club offers facilities for players of all standards from juniors and beginners up to first team Yorkshire League players.

Rothwell Cricket Club field two teams in the Pontefract & District Cricket League, with the 1st XI competing in the top division in 2020.

Every Saturday morning a popular Parkrun is held around Springhead Park.

All content from Kiddle encyclopedia articles (including the article images and facts) can be freely used under Attribution-ShareAlike license, unless stated otherwise. Cite this article:
Rothwell, West Yorkshire Facts for Kids. Kiddle Encyclopedia.