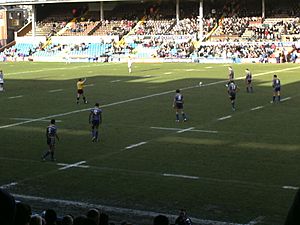 Leeds Rhinos (used to be Leeds RLFC) are a Rugby League team in Leeds, West Yorkshire. They play in Super League and last won it in 2015.

Leeds Rhinos play at the Headingley Carnegie Stadium, which has both Rugby and Cricket grounds. The rugby stadium has a capacity of 22,500. The stadium is located in the Headingley district of the city and is near both Headingley and Burley Park railway stations.

The club mascot is Ronnie the Rhino, who was introduced when the club changed names. As well as making appearances at the stadium on match days, Ronnie also travels around schools in Leeds promoting sport and healthy living. Ronnie has been popular with children who attend games, emphasizing the club's intention to cater for families.

All content from Kiddle encyclopedia articles (including the article images and facts) can be freely used under Attribution-ShareAlike license, unless stated otherwise. Cite this article:
Leeds Rhinos Facts for Kids. Kiddle Encyclopedia.