Leeds Minster, or the Minster and Parish Church of Saint Peter-at-Leeds, (formerly Leeds Parish Church), in Leeds, West Yorkshire is a large Church of England foundation of major architectural and liturgical significance. A church is recorded on the site as early as the 7th century, although the present structure is a Gothic Revival one, dating from the mid-19th century. It is dedicated to Saint Peter and was the Parish Church of Leeds before becoming a Minster in 2012. It has been designated a grade I listed building by English Heritage.

A church at Ledes is mentioned in the Domesday Book of 1086 although it is likely that there had been a church on the same site for much longer, as evidenced by the fragments of Anglo-Scandinavian stone crosses (known as the Leeds Cross) found on the site during the construction of the current church. The church was rebuilt twice, after a fire in the 14th century, and again in the 19th century. Walter Farquhar Hook, Vicar of Leeds from 1837 until preferment as Dean of Chichester in 1859 was responsible for the construction of the present building, and of the revitalisation of the Anglican church throughout Leeds as a whole. The architect was Robert Dennis Chantrell.

It was originally intended only to remodel the church in order to provide space for a larger congregation. In November 1837 a scheme was approved under which the tower would have been moved from the crossing to the north side, the chancel widened to the same breadth as the nave, and the north aisle roof raised. When work began, however, it was discovered that much of the structure was in a perilous condition, and it was decided to replace the church completely. The new building was the largest new church in England built since Sir Christopher Wren's St Paul's Cathedral erected after the Great Fire of London and consecrated in 1707. The new parish church was rebuilt by voluntary contributions from the townspeople at a cost of over £29,000 and consecrated on 2 September 1841. Florence Nightingale and Dr Edward Bouverie Pusey were among the congregation and Dr Samuel Sebastian Wesley played the organ.

The parish church became Leeds Minster in a ceremony on Sunday 2 September 2012, on the 171st anniversary of the consecration of the building.

The rambling parish of Leeds covered an area of 21,000 acres. It included in it the out-townships of Allerton, Armley, Beeston, Bramley, Farnley, Gipton, Headingley, Holbeck, Hunslet and Wortley; Adel and Whitkirk were separate parishes. On founding the Benedictine Priory of the Holy Trinity, York in 1089 Ralph Paynel granted it the right to appoint the priest and collect the tithes from the parish of Leeds. Over years, many out-townships established local chapels of ease to save parishioners the trek to the parish church: Bramley's, founded by monks at Kirkstall Abbey, may have been first, followed by Farnley's from about 1240, Beeston's from 1597, Headingley's from 1616, and Armley and Wortley's from 1649. In the town itself, the parish church was supplemented by St John's Church on New Briggate in 1634 and Holy Trinity Church on Boar Lane in 1727 (both of which remained in the Parish of Leeds). The nineteenth century saw a large number of new Commissioners' Churches built throughout the parish.

Following the English Reformation, the right to appoint the parish's priest passed between different owners until 1588, when a group of parishioners bought it, putting it in the hands of Leeds's people.

Cruciform in plan, the minster is built in ashlar stone with slate roofs, in an imitation of the English Gothic style of the late 14th century, a period of transition from the Decorated to the Perpendicular. The church is 180 feet (55 m) long and 86 feet (26 m) wide, its tower rising to 139 feet (42 m). The chancel and nave each have four bays of equal length with clerestories and tall aisles. The tower is situated at the centre of north aisle. Below the tower on the north side is the main entrance. The tower has four unequal stages with panelled sides and corner buttresses terminating in crocketed turrets with openwork battlements and crocketted pinnacles. The clock was made by Potts of Leeds. 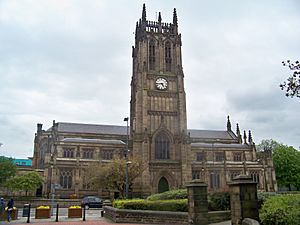 The north face of the church

The windows exhibit Perpendicular tracery and there is a five-light east window from 1846 containing glass collected on the continent. At the east end the sanctuary has a marble arcade with mosaics by Salviati of Venice, and the reredos is made of coloured marble and alabaster by George Edmund Street.

The organ, parts of which date from 1841 and earlier, is essentially a Harrison and Harrison of 1914 vintage, but incorporating significant amounts of pipework by Edmund Schulze. It was restored in 1927 and 1949 by Harrison and Harrison; in 1965 by Wood, Wordsworth and in 1997 by Andrew Carter. The restoration of the blowing plant and refurbishment of the blower house were undertaken in 1997 by Allfab Engineering of Methley.

Among many artefacts and memorials in the Minster are the Anglo-Saxon Leeds Cross (an Anglian cross to the south of the marble pavement known as the altar flat) the pieces of which were discovered in 1838 when the medieval church was demolished. There is also a brass commemorating Captain Oates of Scott's Antarctic expedition, who had Leeds connections. Flemish stained glass enhances the apse of Chantrell's interior – he designed the windows to fit the glass – and of more recent date (1997) is Sally Scott's Angel Screen at the north tower porch entrance, an example of contemporary glass engraving and a gift from the family of Lord Marshall of Leeds. The Christopher Beckett memorial and most of the architectural sculpture is by Robert Mawer.

Outside in the churchyard, facing out onto Kirkgate, is the Leeds Rifles War Memorial, which was designed by Sir Edwin Lutyens and unveiled on 13 November 1921. It is separately a grade II listed building. 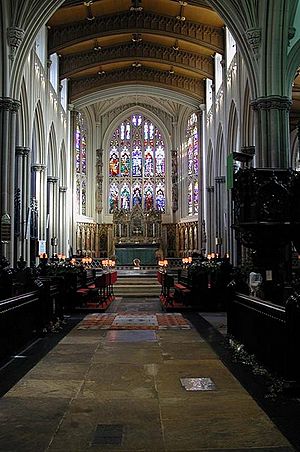 Interior of the Parish Church.

The Minster and Parish Church of Saint Peter-at-Leeds is in the Diocese of Leeds (which has its cathedrals at Ripon, Wakefield and Bradford), in the Parish of Leeds City along with the Georgian Church of Holy Trinity, Boar Lane and the congregation of St Mary's Lincoln Green worshipping weekly in the Hall of St Peter's Church of England Primary School, Cromwell Street, Burmantofts. The minster is at the easternmost extremity of the city centre, within a precinct bordering two of the city's oldest thoroughfares - Kirkgate (now part of the Inner City Loop Road) to the north, and The Calls to the south. Another ancient pathway, High Court Ings, connects the western precinct with High Court.

The Reverend Canon Sam Corley is the Priest-in-Charge and Rector-Designate of Leeds Minster, he was licensed at Leeds Minster on 6 October 2015

During choir terms there are at least three choral services each week sung by an adult chamber choir of skilled volunteers and choral scholars drawn from Leeds and York Universities as well as Leeds College of Music. There is a weekly organ recital from September to July inclusive on Fridays at 12.30pm, featuring the resident organists and guest recitalists.

Leeds Minster is a member of the Greater Churches Group. Its mission and vision for future service to the city, the diocese and the Church of England are a constant care and concern of those who seek to serve the church and parish. Sir John Betjeman in a BBC Broadcast remarked that: "There's High Church, Low Church and Leeds Parish Church".

The church is illuminated at night by floodlights donated by Tetley's brewery.

The building is open to visitors for at least seven hours each day. Parishioner volunteers serve refreshments and light meals in the refectory in the City of Leeds Room constructed in the north-west aisle in 1975.

The minster archives are held at the Leeds office of West Yorkshire Archive Service. The church has memorials to families who were prominent in the parish, including the Kitchingman, Fenton, Lodge, Milner, Cookson, and Ibbetsons.

On 2 September 2012 Leeds Parish Church became a minster; it may be designated the pro-cathedral of the new Diocese of Leeds if the diocesan bishop so decides.

Leeds Minster has a long choral history. The Boys' and Men's Choir sang services on an almost daily basis until 2015, with a separate Girls' Choir founded by Jonathan Lilley in 1997.

Organists from 1842 include Samuel Sebastian Wesley 1842–1849, Dr Edward Bairstow 1906–1913, Dr Alfred Melville Cook 1937–1956, Dr Donald Hunt OBE 1957–1975, and Dr Simon Lindley who came to Leeds after service at St Albans Cathedral and churches in the City of London. Organist and Master of the Music 1975-2016 and only the ninth musical incumbent since Wesley's day, Lindley remained organist at Leeds Town Hall until Summer 2017 when his place there as City Organist, Host of the Organ series and Organ Curator, has been taken by Darius Battiwalla. Paul Dewhurst, previously Organist of Pontefract Parish Church (St Giles), succeeded as Director of Music at Leeds Minster from November 2016. Dewhurst is also conductor of Hull Choral Union and Wakefield Festival Chorus and moved to Bridlington Priory as Director of Music in January 2020. He was succeeded at Leeds by Alexander Woodrow, with David Houlder remaining in post as Sub-Organist, a position he has held since moving to Leeds from Liverpool Cathedral in 2003.

Following the suspension of boy and girl choristers in 2015, the present Choir of Leeds Minster is an adult chamber choir of approximately two dozen voices, consisting of skilled volunteer singers alongside a complement of choral scholars (undergraduates from the Universities of Leeds and York and Leeds College of Music) and supernumerary singers. During term time, Evensong is sung by the full choir on Thursday evenings as well as the two fully choral services each Sunday. A semi-professional adult chamber choir, Saint Peter's Singers of Leeds founded in 1977 meets for rehearsals on Sunday evening during term time and presents regular concerts as well as singing at a number of choral services each season both with the Minster Choir and on their own as a separate unit.

The Minster Choir has been associated with the Royal School of Church Music since the early 1930s through links with Sir Sydney Nicholson, RSCM founder and churchwarden, Herbert Bacon Smith. Previous Organist Simon Lindley was one of the RSCM's longest-serving special commissioners and has directed RSCM courses on four continents.

The 200th-anniversary celebrations for Samuel Sebastian Wesley, born 14 August 1810, began with Festal Evensong on Sunday 4 July 2010 followed by a Gala Choral Recital. Worship on Sunday 15 August was broadcast on BBC Radio Four. Dr Lindley gave a commemorative recital of Wesley's organ music in the evening and a commemorative recital of music by Wesley at Leeds Town Hall on 13 September.

All content from Kiddle encyclopedia articles (including the article images and facts) can be freely used under Attribution-ShareAlike license, unless stated otherwise. Cite this article:
Leeds Minster Facts for Kids. Kiddle Encyclopedia.