Kevin Sinfield, MBE (born 12 September 1980), also known by the nickname of "Sir Kev", is the Director of Rugby for the Leeds Rhinos in the Super League, and an English former professional rugby league footballer, who captained the Leeds Rhinos in the Super League. His usual position was loose forward, although he sometimes played both stand-off and hooker. He is widely regarded as one of the greatest kickers in rugby league history.

Sinfield played his entire professional career with Leeds and is one of the most successful players in the Super League history, having captained the team to seven Super League championships and two Challenge Cup successes. He also earned individual accolades as winner of the Lance Todd Trophy (2005), Harry Sunderland Trophy twice (2009, 2012) and the Golden Boot (2012), one of only four British-based players to win the latter. He holds records as the highest points-scorer in Super League history, the third highest points-scorer in British rugby league history, and Leeds' record points scorer. Sinfield is also the only captain to have led a team to win three consecutive Super League titles.

He won 26 caps for England, who he captained, and 14 caps for Great Britain.

Sinfield made his first team début for Leeds aged 16 against the Sheffield Eagles. He went on to make three further appearances during the 1997 and 1998 seasons, scoring his first try against the Huddersfield Giants in September 1998. 1999 was a breakthrough season for Sinfield, making 21 appearances and scoring 2 tries. He was unlucky not to be selected for the 1999 Challenge Cup Final at the old Wembley Stadium. Leeds defeated the London Broncos 52–16.

Sinfield was a member of the England squad for the 2000 Rugby League World Cup, notably scoring a hat-trick of tries in a 76–4 victory over Russia. During the 2001 Kangaroo tour he played for Great Britain in all three Ashes Tests against the Australians. Sinfield played for Leeds at stand-off in the 2003 Challenge Cup Final against Bradford Bulls, kicking four goals in his side's defeat. He played for Great Britain in the 2nd and 3rd Ashes Tests of the 2003 Kangaroo tour of Great Britain and France. Sinfield played for Leeds at stand-off, kicking four goals in their 2004 Super League Grand Final victory against Bradford. As Super League IX champions, Leeds faced 2004 NRL season premiers, the Bulldogs in the 2005 World Club Challenge. Sinfield captained Leeds from stand-off, kicking five goals and one drop goal in their 39–32 victory.

Sinfield playing for Leeds in 2010

Sinfield played for Leeds in the 2005 Challenge Cup Final at stand-off, kicking four goals in their loss against Hull F.C. but being awarded the Lance Todd Trophy as man of the match nonetheless. He played for Leeds at loose forward, kicking a goal in their 2005 Super League Grand Final loss against Bradford Bulls. He was also named in 2005's Super League Dream Team. Sinfield was selected to play for Great Britain in the end-of-season 2005 Tri-nations tournament. He was named in 2006's Super League Dream Team. In 2007, Sinfield became the first Leeds player to score in every round of a Super League season, a feat which he repeated in the 2011 season including kicking 6 out of 7 goals in the Rhinos' fourth Grand final victory over St. Helens in 5 years. In the post-season Sinfield played for Great Britain against the 2007 All Golds Tourists.

Sinfield celebrated his testimonial season in 2008. He was the man-of-the-match, scoring seven points as Leeds defeated Melbourne 11–4 at Elland Road. During the season Sinfield set a club record by scoring in 63 consecutive matches. He also set a Super League record by scoring in 52 consecutive Super League games. Sinfield scored his 2,000th point for the club as Leeds defeated St Helens for the second successive year in the 2008 Super League Grand Final. Leeds won 24–16, with Sinfield successfully kicking four goals. It was the first time Leeds had ever won back-to-back titles. It was also the first time that a Super League team had won both the World Club Challenge, and the Grand Final in the same calendar year. He was also selected for the England squad to compete in the 2008 Rugby League World Cup tournament in Australia. Group A's first match against Papua New Guinea he played at loose forward and kicked four goals from six attempts in England's victory. During the 2009 season, Sinfield became only the second player, after Lewis Jones, to score 1,000 goals for Leeds.

Sinfield capped the 2009 season by winning the Harry Sunderland Trophy for his performance as he led Leeds to victory in a third successive Grand Final. Leeds defeated St Helens 18–10, with Sinfield scoring six of the points, including a drop goal. With victory, Sinfield became the first player in history to captain four championship-winning teams. He dedicated the win at Old Trafford to the recently deceased former Leeds player John Holmes.

After that he played for England in the 2009 Four Nations tournament.

Sinfield was selected to play for England against France in the one-off test in 2010.

He played in the 2010 Challenge Cup Final defeat by the Warrington Wolves at Wembley Stadium. 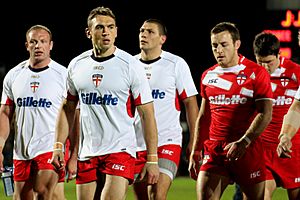 Sinfield playing for England in 2011

He captained Leeds from stand-off in the 2011 Challenge Cup Final defeat by the Wigan Warriors at Wembley Stadium, kicking only one goal from four attempts in their loss.

However at the end of the season he extended his record to captaining five championship-winning teams after Leeds Rhinos' victory over St Helens in the 2011 Super League Grand Final at Old Trafford.

Sinfield played a pivotal role in the England team in the 2011 Gillette Four Nations, which involved games against Australia, New Zealand and Wales. They reached the Gillette Four Nations Final courtesy of coming 2nd in the group table, with Sinfield kicking two goals England lost out to Australia.

Sinfield became the all-time top points scorer for Leeds early in the 2012 season.

He played in the 2012 Challenge Cup Final defeat by the Warrington Wolves at Wembley Stadium.

In 2012 he extended his championship tally as Leeds again came from 5th in the regular season to triumph at Old Trafford – this time 26–18 against Warrington. Sinfield turned in a Man-of-the-Match performance in the final, winning the Harry Sunderland Trophy with a try, a penalty and 4 conversions. Remarkably, he finished the 5-match playoff campaign with a 100% goalkicking record.

It was announced in January 2013 that Sinfield had won the Golden Boot – only the fourth Englishman to do so. He beat off competition from Wigan full-back Sam Tomkins as well as Australians Cameron Smith, Ben Barba, Cooper Cronk and Nate Myles to claim the prize that is awarded annually by Rugby League World magazine to the game's top performer. 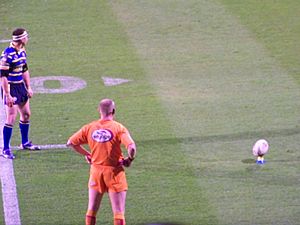 On 17 July 2014, for the first time in his career, Sinfield was sent off against Castleford for a headbutt on Luke Dorn A month later he captained Leeds in the 2014 Challenge Cup Final victory over the Castleford Tigers at Wembley Stadium, the last remaining domestic trophy that he had yet to win.

On 31 March 2015 Sinfield announced the 2015 season would be his last in rugby league and that he will finish his career with rugby union side Yorkshire Carnegie.

He played in the 2015 Challenge Cup Final victory over Hull Kingston Rovers at Wembley Stadium.

His last match in rugby league was the 2015 Super League Grand Final, in which he captained Leeds to victory and thus secured the treble for the first time in the club's history.

Sinfield joined Leeds Rhinos sister club Yorkshire Carnegie on an 18-month contract. Sinfield made his début at Headingley on 15 November 2015. He came on as a sub in the last 15 minutes in the British and Irish Cup, scoring a penalty but missing a conversion later on. In April 2016, Sinfield announced that he would retire from playing at the end of the season. During the 2015–2016 season he played 18 games kicking 37 conversions and 16 penalties a total of 122 points.

In November 2020, Sinfield announced he would be running seven marathons in seven days to raise £77,777 in funds for ex-Leeds teammate Rob Burrow, who was diagnosed with Motor Neurone Disease (MND) a year earlier, as well as the MND Association. He began his first marathon on 1 December with the fundraising target already exceeded, Sinfield described it as "completely overwhelming" that the target had been reached so quickly. By the time he finished his seventh marathon on 7 December, more than £1.2 million had been raised. At the conclusion, he said it had "probably been the most special week in my life". and said it was his greatest achievement above all he achieved in rugby league. By the following day, the total raised had surpassed £2 million. Of the funds raised, £500,000 was earmarked for research projects, a figure doubled by a contribution from medical research charity LifeArc to create a £1 million fund for MND research projects.

Sinfield was appointed Member of the Order of the British Empire (MBE) in the 2014 Birthday Honours for services to rugby league.

Sinfield became the first rugby league player to be nominated for the BBC Sports Personality of the Year Award, finishing in second place behind Andy Murray in 2015.

Kevin is a lifelong supporter of Oldham Athletic, and was a regular at games before his rugby career took off.

Sinfield set a number of club and league records during his rugby league career. At Leeds, he is the all-time leading points scorer (3,967), and made the third highest number of appearances (521) for the club. With a combined total of 4,231 points at club and representative level, he is the third highest points scorer in British rugby league history (behind Neil Fox and Jim Sullivan). He is the Super League's record appearance holder (454) and point's scorer.

All content from Kiddle encyclopedia articles (including the article images and facts) can be freely used under Attribution-ShareAlike license, unless stated otherwise. Cite this article:
Kevin Sinfield Facts for Kids. Kiddle Encyclopedia.