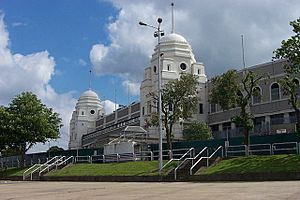 The twin towers were an iconic part of the stadium.

Wembley Stadium was a sports arena in London, England. It was built in 1923 and was first known as the Empire Stadium, but because the area it was in is named "Wembley," it was renamed "Wembley Stadium." It featured twin towers by the entrance.

As well as being a sports arena, it had also been the site for several concerts. The most famous one is the Live Aid concert held there in July of 1985.

In 2000, Wembley Stadium was closed. In 2003, it was demolished, and a brand-new stadium with the same name was put up in its place.

its a shame they knocked iconic twin towers down sure with our brilliant architects could easily built around them.also a nostalgic trip for many a football fan, you find it was called twin towers more than Wembley Stadium , hence keeping towers ,

All content from Kiddle encyclopedia articles (including the article images and facts) can be freely used under Attribution-ShareAlike license, unless stated otherwise. Cite this article:
Wembley Stadium (1923) Facts for Kids. Kiddle Encyclopedia.