With over 168,000 visitors travelling to the islands in 2018, tourism is the country's main industry, and the leading element of the economy, ahead of offshore banking, pearls, and marine and fruit exports.

The Cook Islands are in the South Pacific Ocean, northeast of New Zealand, between French Polynesia and American Samoa. There are 15 major islands spread over 2,200,000 km2 (849,425 sq mi) of ocean, divided into two distinct groups: the Southern Cook Islands and the Northern Cook Islands of coral atolls.

The islands were formed by volcanic activity; the northern group is older and consists of six atolls, which are sunken volcanoes topped by coral growth. The climate is moderate to tropical. 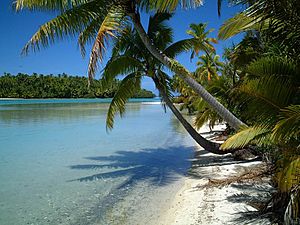 Tapuaetai (One Foot Island) in the southern part of Aitutaki Atoll

The 15 islands and two reefs are grouped as follows: 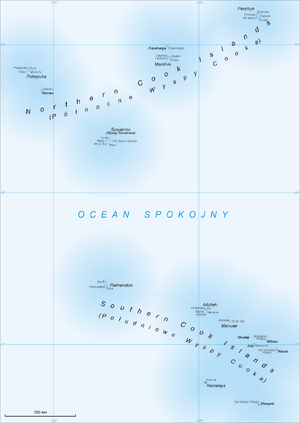 Map of the Cook Islands. 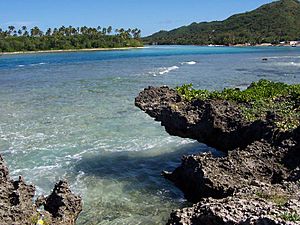 The Cook Islands were first settled in the 6th century by Polynesian people who migrated from Tahiti, an island 1,154 kilometres (717 mi) to the northeast.

Spanish ships visited the islands in the 16th century; the first written record of contact with the islands came in 1595 with the sighting of Pukapuka by Spanish sailor Álvaro de Mendaña de Neira, who called it San Bernardo (Saint Bernard). Pedro Fernandes de Queirós, a Portuguese captain working for the Spanish crown, made the first recorded European landing in the islands when he set foot on Rakahanga in 1606, calling it Gente Hermosa (Beautiful People).

British navigator Captain James Cook arrived in 1773 and 1777 and named the islands the Hervey Islands; the name "Cook Islands", in honour of Cook, appeared on a Russian naval chart published in the 1820s.

In 1813 John Williams, a missionary on the Endeavour (not the same ship as Cook's) made the first recorded sighting of Rarotonga. The first recorded landing on Rarotonga by Europeans was in 1814 by the Cumberland; trouble broke out between the sailors and the Islanders and many were killed on both sides. The islands saw no more Europeans until missionaries arrived from England in 1821. Christianity quickly took hold in the culture and many islanders continue to be Christian believers today. 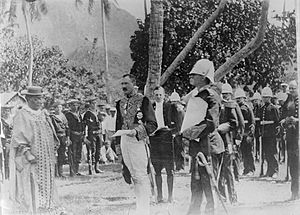 The Cook Islands became a British protectorate in 1888, due largely to community fears that France might occupy the territory as it had Tahiti. On 6 September 1900, the leading islanders presented a petition asking that the islands (including Niue "if possible") should be annexed as British territory. On 8–9 October 1900 seven instruments of cession of Rarotonga and other islands were signed by their chiefs and people; and by a British Proclamation issued at the same time the cessions were accepted, the islands being declared parts of Her Britannic Majesty's dominions. These instruments did not include Aitutaki. It appears that, though the inhabitants regarded themselves as British subjects, the Crown's title was uncertain, and the island was formally annexed by Proclamation dated 9 October 1900. The islands were included within the boundaries of the Colony of New Zealand in 1901 by Order in Council under the Colonial Boundaries Act, 1895 of the United Kingdom. The boundary change became effective on 11 June 1901 and the Cook Islands have had a formal relationship with New Zealand ever since.

When the British Nationality and New Zealand Citizenship Act 1948 came into effect on 1 January 1949, Cook Islanders who were British subjects gained New Zealand citizenship. The country remained a New Zealand dependent territory until 1965, when the New Zealand Government decided to offer self-governing status to its colony. In that year, Albert Henry of the Cook Islands Party was elected as the first Premier. Henry led the country until he was accused of vote-rigging. He was succeeded in 1978 by Tom Davis of the Democratic Party.

There are island councils on all of the inhabited outer islands (Outer Islands Local Government Act 1987 with amendments up to 2004, and Palmerston Island Local Government Act 1993) except Nassau, which is governed by Pukapuka (Suwarrow, with only one caretaker living on the island, also governed by Pukapuka, is not counted with the inhabited islands in this context). Each council is headed by a mayor.

The Ten Outer Islands Councils are 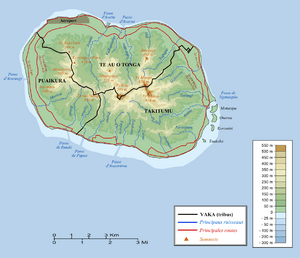 The three Vaka councils of Rarotonga established in 1997 (Rarotonga Local Government Act 1997), also headed by mayors, were abolished in February 2008, despite much controversy.

The three Vaka councils on Rarotonga were:

On the lowest level, there are village committees. Nassau, which is governed by Pukapuka, has an island committee (Nassau Island Committee), which advises the Pukapuka Island Council on matters concerning its own island.

In the Cook Islands the Church is separate from the state, and most of the population is Christian. The religious distribution is as follows: 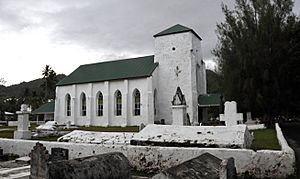 The various Protestant groups account for 62.8% of the believers, the most followed denomination being the Cook Islands Christian Church with 49.1%. Other Protestant Christian groups include Seventh-day Adventist 7.9%, Assemblies of God 3.7% Apostolic Church 2.1%. The main non-Protestant group is Roman Catholics with 17% of the population. The Church of Jesus Christ of Latter-day Saints makes up 4.4%. 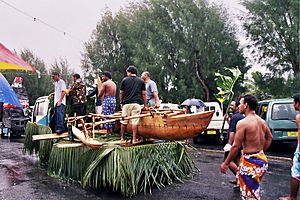 Music in the Cook Islands is varied, with Christian songs being quite popular, but traditional dancing and songs in Polynesian languages remain popular. 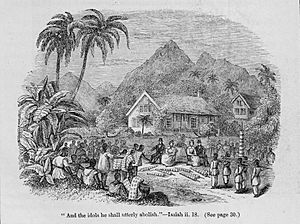 Confiscation and destruction of idol gods by European missionaries in Rarotonga, 1837 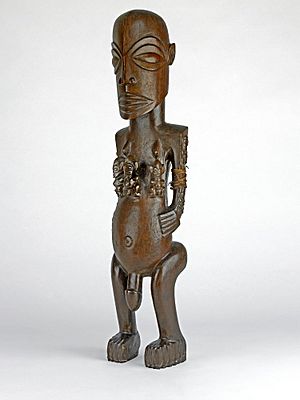 This wooden late eighteenth or early nineteenth century carved figure escaped emasculation. Only one other comparable example is known apart from this one in the British Museum.

Woodcarving is a common art form in the Cook Islands. The proximity of islands in the southern group helped produce a homogeneous style of carving but which had special developments in each island. Rarotonga is known for its fisherman's gods and staff-gods, Atiu for its wooden seats, Mitiaro, Mauke and Atiu for mace and slab gods and Mangaia for its ceremonial adzes. Most of the original wood carvings were either spirited away by early European collectors or were burned in large numbers by missionaries. Today, carving is no longer the major art form with the same spiritual and cultural emphasis given to it by the Maori in New Zealand. However, there are continual efforts to interest young people in their heritage and some good work is being turned out under the guidance of older carvers. Atiu, in particular, has a strong tradition of crafts both in carving and local fibre arts such as tapa. Mangaia is the source of many fine adzes carved in a distinctive, idiosyncratic style with the so-called double-k design. Mangaia also produces food pounders carved from the heavy calcite found in its extensive limestone caves.

The outer islands produce traditional weaving of mats, basketware and hats. Particularly fine examples of rito hats are worn by women to church. They are made from the uncurled immature fibre of the coconut palm and are of very high quality. The Polynesian equivalent of Panama hats, they are highly valued and are keenly sought by Polynesian visitors from Tahiti. Often, they are decorated with hatbands made of minuscule pupu shells which are painted and stitched on by hand. Although pupu are found on other islands the collection and use of them in decorative work has become a speciality of Mangaia. The weaving of rito is a speciality of the northern island of Penrhyn.

A major art form in the Cook Islands is tivaevae. This is, in essence, the art of handmade Island scenery patchwork quilts. Introduced by the wives of missionaries in the 19th century, the craft grew into a communal activity and is probably one of the main reasons for its popularity.

The Cook Islands has produced internationally recognised contemporary artists, especially in the main island of Rarotonga. Artists include painter (and photographer) Mahiriki Tangaroa, sculptors Eruera (Ted) Nia (originally a film maker) and master carver Mike Tavioni, painter (and Polynesian tattoo enthusiast) Upoko'ina Ian George, Aitutakian-born painter Tim Manavaroa Buchanan, Loretta Reynolds, Judith Kunzlé, Joan Rolls Gragg, Kay George (who is also known for her fabric designs), Apii Rongo, Varu Samuel, and multi-media, installation and community-project artist Ani O'Neill, all of whom currently live on the main island of Rarotonga. Atiuan-based Andrea Eimke is an artist who works in the medium of tapa and other textiles, and also co-authored the book 'Tivaivai – The Social Fabric of the Cook Islands' with British academic Susanne Kuechler. Many of these artists have studied at university art schools in New Zealand and continue to enjoy close links with the New Zealand art scene. 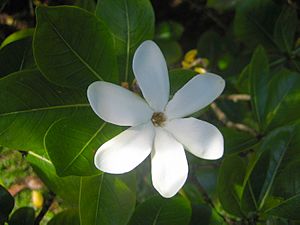 Tiare māori, the national flower of the Cook Islands 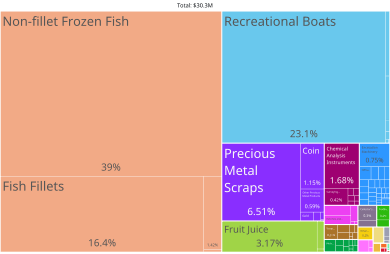 The economy is strongly affected by geography. It is isolated from foreign markets, and has some inadequate infrastructure; it lacks major natural resources, has limited manufacturing and suffers moderately from natural disasters. Tourism provides the economic base that makes up approximately 67.5% of GDP. Additionally, the economy is supported by foreign aid, largely from New Zealand. China has also contributed foreign aid, which has resulted in, among other projects, the Police Headquarters building. The Cook Islands is expanding its agriculture, mining and fishing sectors, with varying success.

Since approximately 1989, the Cook Islands have become a location specialising in so-called asset protection trusts, by which investors shelter assets from the reach of creditors and legal authorities. According to The New York Times, the Cooks have "laws devised to protect foreigners' assets from legal claims in their home countries", which were apparently crafted specifically to thwart the long arm of American justice; creditors must travel to the Cook Islands and argue their cases under Cooks law, often at prohibitive expense. Unlike other foreign jurisdictions such as the British Virgin Islands, the Cayman Islands and Switzerland, the Cooks "generally disregard foreign court orders" and do not require that bank accounts, real estate, or other assets protected from scrutiny (it is illegal to disclose names or any information about Cooks trusts) be physically located within the archipelago. Taxes on trusts and trust employees account for some 8% of the Cook Islands economy, behind tourism but ahead of fishing.

In recent years, the Cook Islands has gained a reputation as a debtor paradise, through the enactment of legislation that permits debtors to shield their property from the claims of creditors.

Since 2008 the Executive Director of Cook Islands Bank has been Vaine Nooana-Arioka.

There are eleven airports in the Cook Islands, including one with a paved runway, Rarotonga International Airport, served by four passenger airlines.

Rugby league is the most popular sport in the Cook Islands.

All content from Kiddle encyclopedia articles (including the article images and facts) can be freely used under Attribution-ShareAlike license, unless stated otherwise. Cite this article:
Cook Islands Facts for Kids. Kiddle Encyclopedia.