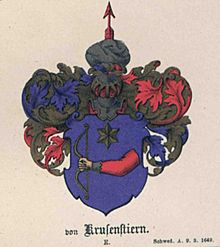 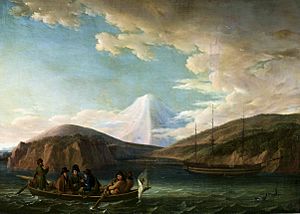 Krusenstern was born in Hagudi, Harrien, Governorate of Estonia, Russian Empire into a Baltic German family descended from the Swedish aristocratic family von Krusenstjerna, who remained in the province after the country was ceded to Russia. In 1787, he joined the Russian Imperial Navy, and served in the war against Sweden. Subsequently, he served in the Royal Navy between 1793 and 1799, visiting America, India and China.

After publishing a paper pointing out the advantages of direct communication by sea between Russia and China by passing Cape Horn at the southern tip of South America and the Cape of Good Hope at the tip of South Africa, he was appointed by Tsar Alexander I to make a voyage to the Far East coast of Asia to endeavour to carry out the project. Under the patronage of Alexander, Count Nikolay Petrovich Rumyantsev and the Russian-American Company, Krusenstern led the first Russian circumnavigation of the world. The chief object of this undertaking was the development of the fur trade with Russian America (Alaska). Other goals of the two-ship expedition were to establish trade with China and Japan, facilitate trade in South America, and examine the coast of California in western North America for a possible colony.

The two ships, Nadezhda (Hope, formerly the British merchant Leander) under the command of Krusenstern, and Neva (formerly the British merchant Thames) under the command of Captain-Lieutenant Yuri F. Lisianski, set sail from Kronstadt in August 1803, rounded Cape Horn of South America, reached the northern Pacific Ocean, and returned via the Cape of Good Hope at South Africa. Krusenstern arrived back at Kronstadt in August 1806. Both seafarers made maps and detailed recordings of their voyages.

Upon his return, Krusenstern wrote a detailed report, "Reise um die Welt in den Jahren 1803, 1804, 1805 und 1806 auf Befehl Seiner Kaiserlichen Majestät Alexanders des Ersten auf den Schiffen Nadeschda und Newa" ("Journey around the World in the Years 1803, 1804, 1805, and 1806 at the Command of his Imperial Majesty Alexander I in the Ships Nadezhda and Neva") published in Saint Petersburg in 1810. It was published in 1811–1812 in Berlin; this was followed by an English translation, published in London in 1813 and subsequently by French, Dutch, Danish, Swedish, and Italian translations. His scientific work, which includes an atlas of the Pacific, was published in 1827 in Saint Petersburg.

As director of the Russian naval school Krusenstern did much useful work. He was also a member of the scientific committee of the marine department, and his contrivance for counteracting the influence of the iron in vessels on the compass was adopted in the navy. Krusenstern became an admiral in 1841 and he was awarded the Pour le Mérite (civil class) in 1842. He died in 1846 in Kiltsi manor, an Estonian manor he had purchased in 1816, and was buried in the Tallinn Cathedral.

The Russian training tall ship Kruzenshtern is named after him. To commemorate the 200th anniversary of Krusenstern's circumnavigation, the ship retraced his route around the globe in 2005–2006.

In Russia (as well as in other Russophone places), a fictional steamship Admiral Ivan Fyodorovich Kruzenshtern from the popular Prostokvashino animated film series is well-known, often as part of a catchphrase "Admiral I.F. Kruzenshtern, a man and a steamship", "pirated" from the title of a requiem poem by Vladimir Mayakovsky, To Comrade Nette, a Man and a Steamship. As a third-level linguistic derivation, there is a Russophone Israel klezmer-rock band, Kruzenshtern & Parohod ("Krusenstern and Steamship").

Another legacy is that the Cook Islands in the South Pacific bear that name thanks to von Krusenstern. Previously known as the Hervey (or Harvey) Islands (or Group), he changed their name in 1835 to honour Captain Cook. More accurately, he changed the name of those which comprised the Southern Group and it was subsequently applied to all 15 islands when the New Zealand Parliament passed "The Cook Islands and other Islands Government Act" in 1901. He recorded the new name in his Atlas de l'Océan Pacifique published at St. Petersburg between 1824 and 1835.

All content from Kiddle encyclopedia articles (including the article images and facts) can be freely used under Attribution-ShareAlike license, unless stated otherwise. Cite this article:
Adam Johann von Krusenstern Facts for Kids. Kiddle Encyclopedia.