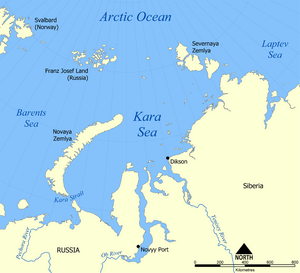 A map showing the location of the Kara Sea. 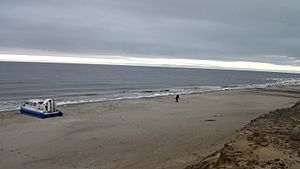 Hivus-10 hovercraft on the shore of the Kara sea

The Kara Sea (Russian: Ка́рское мо́ре) is part of the Arctic Ocean. It lies north of Siberia. The Kara Sea is separated from the Barents Sea to the west by the Kara Strait and Novaya Zemlya, and the Laptev Sea to the east by the Severnaya Zemlya.

The Kara receives a large amount of fresh water from the Ob, Yenisei, Pyasina, and Taimyra rivers, so its salinity is very variable.

Its main ports are Novy Port and Dikson and it is important as a fishing ground although the sea is ice-bound for all but two months of the year. Significant discoveries of petroleum and natural gas, an extension of the West Siberian Oil Basin, have been made but have not yet been developed.

There is concern about the levels of nuclear waste the former Soviet Union dumped in the sea which included six nuclear submarine reactors and ten nuclear reactors, and the effect this will have on the marine environment. An International Atomic Energy Agency appraisal showed that releases are low and localised.

All content from Kiddle encyclopedia articles (including the article images and facts) can be freely used under Attribution-ShareAlike license, unless stated otherwise. Cite this article:
Kara Sea Facts for Kids. Kiddle Encyclopedia.