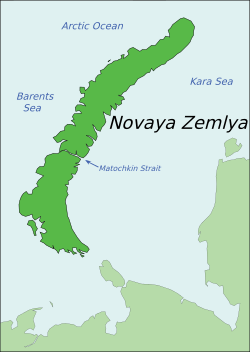 Novaya Zemlya (Russian: Но́вая Земля́) is an archipelago in the Arctic Ocean in the north of Russia and the extreme northeast of Europe. The archipelago is made of a north island and a south island; it separates the Barents Sea from the Kara Sea. There is a narrow channel, called Matochkin Strait that separates the two islands. Both islands together are about 900 km long; they are between 470 and 1150 km north of the Arctic Circle. Today, 2716 people live on the islands. 2622 of them live in the capital Belushya Guba (on the south island)

The Russians knew of Novaya Zemlya from the 11th century, when hunters from Novgorod visited the area.

Novaya Zemlya is the northern part of the Ural Mountains and the interior is mountainous throughout. The northern island contains many glaciers, while the southern one has a tundra landscape.

In July 1954, Novaya Zemlya was designated the Novaya Zemlya Test Site. It was used as a test site throughout the cold war. In 1961 Tsar Bomba was dropped on the archipelago. The Tsar Bomb was the largest nuclear bomb ever made at 50 Mt. By contrast, the largest weapon ever produced by the United States, the now-decommissioned B41, had a predicted maximum yield of 25 Mt.

All content from Kiddle encyclopedia articles (including the article images and facts) can be freely used under Attribution-ShareAlike license, unless stated otherwise. Cite this article:
Novaya Zemlya Facts for Kids. Kiddle Encyclopedia.