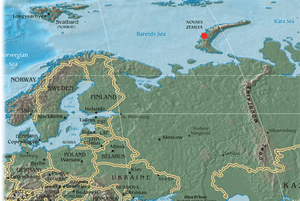 Tsar Bomba, the nickname for the AN602 H-bomb, was the largest, most powerful nuclear weapon ever used. It was originally tested by the Soviet Union on October 30, 1961. It was a three stage H-bomb.

This bomb is also called the Father of Bombs.

The testing site of the nuclear bomb was Novaya Zemlya. There was not much fallout because the bomb was detonated at 13 km (8.1 mi) height.

The bomb was dropped by a Soviet bomber, the Tupolev Tu-95. This was the only plane in the world which could carry the bomb. When the bomb exploded, the bomber fell one Kilometer in height from the huge blast wave.

All content from Kiddle encyclopedia articles (including the article images and facts) can be freely used under Attribution-ShareAlike license, unless stated otherwise. Cite this article:
Tsar Bomba Facts for Kids. Kiddle Encyclopedia.