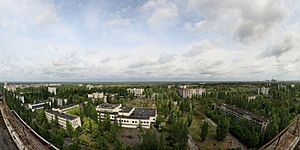 The city of Pripyat abandoned after the fallout from Chernobyl disaster.

There was also radioactive fallout after a part of the nuclear power station at Chernobyl exploded. The fallout caused serious contamination over an area including Ukraine, Belarus, Russia, Scandinavia and some parts of Europe. All people living in an area of 30 kilometres radius around the power plant were forced to move because of the fallout with villages and towns being abandoned.

All content from Kiddle encyclopedia articles (including the article images and facts) can be freely used under Attribution-ShareAlike license, unless stated otherwise. Cite this article:
Nuclear fallout Facts for Kids. Kiddle Encyclopedia.