Kids Encyclopedia Facts
This page is about the city of Chernobyl Ukraine. For information on the 1986 nuclear plant disaster, see Chernobyl disaster 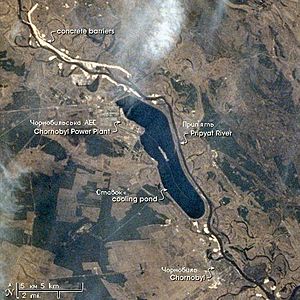 Chornobyl area. Taken from the Russian Mir spacecraft in 1997

Chernobyl or Chornobyl (Ukrainian: Чорнобиль) is a city in northern Ukraine, near the border with Belarus.

It was a major communications node and important center of trade and commerce, especially in the 19th century. The city is 14.5 kilometers (9 miles) south by south-east of the Chornobyl nuclear power plant, which became known for the Chornobyl disaster. The plant exploded on 26 April 1986; clouds of radioactive particles were released, and the severely damaged containment vessel started leaking radioactive matter. More than 100,000 people were evacuated from the city and other affected areas. Despite the fact that radiation is still being emitted from the nuclear disaster site, the 800-year-old city of Chornobyl survives. As of 2004, government workers still police the zone. They try to clean up radioactive material. Hundreds of people — mostly the elderly — have decided to live with the dangers and have returned to their homes in the zone's towns and villages. Their population was highest in 1987, when there were more than 1200 people. In 2003, there were about 300. There are currently 704 people living in Chornobyl, the houses that have people inside have a sign on the outside saying, Owner of this house lives here.

All content from Kiddle encyclopedia articles (including the article images and facts) can be freely used under Attribution-ShareAlike license, unless stated otherwise. Cite this article:
Chernobyl Facts for Kids. Kiddle Encyclopedia.