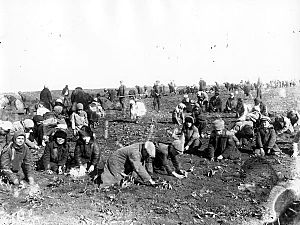 Children are digging up frozen potatoes in the field of a collective farm in Udachne village, Donetsk Oblast, Ukraine, 1933

The Holodomor (Ukrainian: Голодомор, which means "murder by hunger") was a man-made famine and possibly a genocide that happened in Ukraine in 1932 and in 1933. At that time, Ukraine was a part of the Soviet Union. About seven million people starved to death in the Holodomor.

Joseph Stalin was the leader and dictator of the Soviet Union, which was a communist country. He made farmers in the Soviet Union change the way they farmed, then he tried to make the farmers work harder for the government-owned farms, for less money. Many people in the Ukraine did not want to go along with this. When the Ukraine had a famine, Stalin refused to help the people in the Ukraine. Instead, the government took food away from people. It became illegal (against the law) to pick up food from the ground of fields. The government also tried to stop people from moving around the country to look for food.

Scholars and politicians using the word Holodomor say the man-made aspects of the famine, was a genocide; some consider the huge loss of life comparable to the Holocaust. They argue that the Soviet policies were an attack on the rise of Ukrainian nationalism and therefore is a genocide.

Other scholars say that the Holodomor was an unexpected consequence of the rapid and massive industrialization started by Stalin, that brought radical economic changes to the farmers and the country, and which was not done on purpose.

All content from Kiddle encyclopedia articles (including the article images and facts) can be freely used under Attribution-ShareAlike license, unless stated otherwise. Cite this article:
Holodomor Facts for Kids. Kiddle Encyclopedia.