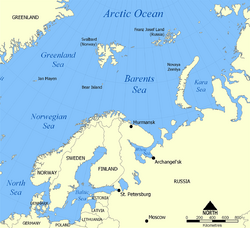 Location of the Barents Sea

The Barents Sea is a marginal sea of the Arctic Ocean. It is north of Norway and Russia. It was called the Murman Sea in the Middle Ages. The new name is from the Dutch navigator Willem Barents. It is a rather deep shelf sea. The average depth is 760 feet (230 m) and maximum depth is 1,480 feet (450 m). It is bordered by the Norwegian Sea in the west, the islands of Svalbard (Norway) in the northwest, and the islands of Franz Josef Land and Novaya Zemlya in the northeast and east. Novaya Zemlya separates the Kara Sea from the Barents Sea. A lot of fossil fuel energy resources are in the Barents Sea area.

The southern half of the Barents Sea stays ice-free year round due to the warmth brought by the North Atlantic drift. This includes the ports of Murmansk in Russia and Vardø in Norway. In September, the entire Barents Sea is mostly ice-free. Until the end of the Winter War, Finland's territories reached the Barents Sea. This made the harbor at Petsamo Finland's only ice-free winter harbor. 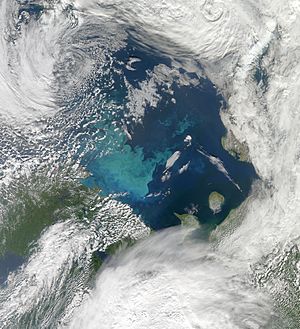 Phytoplankton bloom in the Barents Sea. The milky-blue colour in the bloom suggests that it has large numbers of coccolithophores.

Due to the North Atlantic drift, the Barents Sea has a lot of plants and animals compared to other oceans of similar latitude. The spring bloom of phytoplankton can start quite early close to the ice edge. The fresh water from the melting ice makes up a water layer on top of the sea water. The phytoplankton bloom feeds zooplankton. The animals that eat zooplankton include young cod, capelin, polar cod, whales, and Little Auk. The capelin is a main food for animals such as the North-East Arctic cod, harp seals, and seabirds such as Common Guillemot and Brunnich's Guillemot. The fisheries of the Barents Sea, in particular the cod fisheries, are of great importance for both Norway and Russia.

All content from Kiddle encyclopedia articles (including the article images and facts) can be freely used under Attribution-ShareAlike license, unless stated otherwise. Cite this article:
Barents Sea Facts for Kids. Kiddle Encyclopedia.