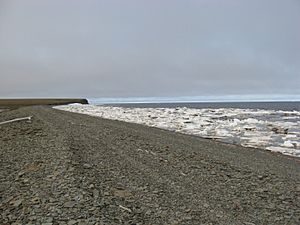 The shore of the Anabar Bay.

The Laptev Sea is a marginal sea of the Arctic Ocean. It is between the northern coast of Siberia, the Taimyr Peninsula, Severnaya Zemlya and the New Siberian Islands. Its northern boundary passes from the Arctic Cape and ends at the Anisiy Cape. The Kara Sea is to the west, the East Siberian Sea to the east.

The sea is named after the Russian explorers Dmitry Laptev and Khariton Laptev. The sea has a severe climate with temperatures below 0 °C (32 °F) over more than 9 months per year. There is low water salinity. There are few flora, fauna and humans. Most of the seas is less than 50 meters deep. It is frozen most of the time, though generally clear in August and September.

The sea shores were lived on for thousands of years by tribes of Yukaghirs and then Evens and Evenks. They were then settled by Yakuts and later by Russians. Russian explorations of the area started in the 17th century. They came from the south by several large rivers which empty into the sea. These rivers include the Lena River, the Khatanga, the Anabar, the Olenyok, the Omoloy and the Yana. The sea has several dozen islands, many have well-preserved mammoth remains.

The largest town and port is Tiksi. 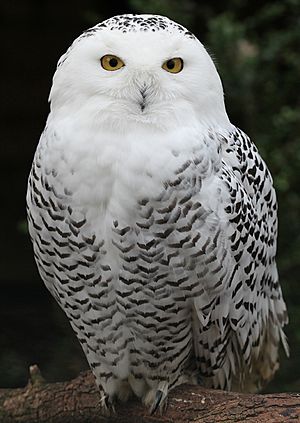 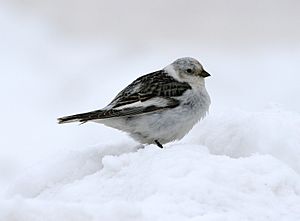 Both flora and fauna are scarce because of the harsh climate. Vegetation of the sea is mostly represented by diatoms, with more than 100 species. The number of green algae, blue-green algae and flagellate species is about 10 each. The phytoplankton is characteristic of brackish waters. There are about 30 species of zooplankton. The coastal flora mainly is mosses and lichens and a few flowering plants including arctic poppy, Saxifraga, Draba and small populations of polar (Salix polaris) and creeping (Salicaceae) willows. Rare vascular plants include species of Cerastium and Saxifraga. Non-vascular plants include the moss genera Detrichum, Dicranum, Pogonatum, Sanionia, Bryum, Orthothecium and Tortura, as well as the lichen genera Cetraria, Thamnolia, Cornicularia, Lecidea, Ochrolechia and Parmelia.

All content from Kiddle encyclopedia articles (including the article images and facts) can be freely used under Attribution-ShareAlike license, unless stated otherwise. Cite this article:
Laptev Sea Facts for Kids. Kiddle Encyclopedia.