The bearded seal (Erignathus barbatus), also called the square flipper seal, is a medium-sized pinniped. It is found in and near to the Arctic Ocean.

Fossils indicate that, during the Pleistocene epoch, bearded seals went as far south as South Carolina.

Features of this earless seal include square front flippers and thick bristles on its muzzle. Adults are greyish-brown in colour, darker on the back. Occasionally the face and neck are reddish-brown. Bearded seal pups are born with a greyish-brown fur with scattered patches of white on the back and head. The bearded seal is unique in the subfamily Phocinae in having two pairs of teats. This is a feature it shares with monk seals.

Bearded seals are a main food source for polar bears and for the Inuit of the Arctic coast. The body fat content of a bearded seal is 30–40%.

Bearded seals feed on a variety of small prey found along the ocean floor, including clams, squid, and fish. Their whiskers serve as feelers in the soft bottom sediments. Adults tend not to dive very deep. They like shallow coastal areas no more than 300 m (980 ft) deep. Pups up to one year old will venture much deeper, diving as deep as 450 m (1,480 ft). 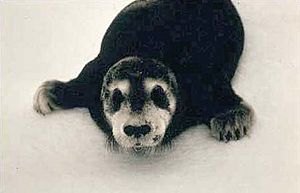 Bearded seals give birth in the spring. In the Canadian Arctic, seal pupping is in May. Further south, in Alaska, most pups are born in late April. Pups are born on small drifting ice floes in shallow waters. They usual weigh around 30–40 kg. They enter the water only hours after they are born, and quickly become very good divers. Mothers care for the pups for 18–24 days. During this time the pups grow at an average rate of 3.3 kg per day. Pups consume an average of eight liters of milk a day. By the time they are weaned, the pups have grown to about one hundred kilograms.

Just before the pups are weaned, a new mating cycle takes place. Females ovulate at the end of their lactation period, but stay close to their pups, ready to defend them if necessary. During the mating season, male seals will "sing". This sound may attract females, or may be used by the males to say what territory is theirs or their readiness for breeding. Males live in the same areas from one year to the next. 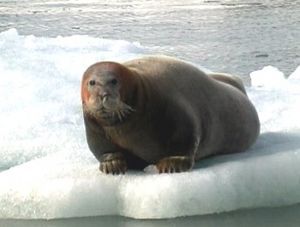 All content from Kiddle encyclopedia articles (including the article images and facts) can be freely used under Attribution-ShareAlike license, unless stated otherwise. Cite this article:
Bearded seal Facts for Kids. Kiddle Encyclopedia.