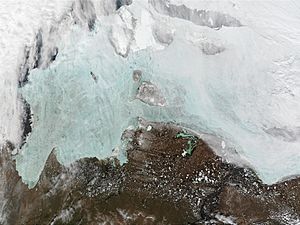 Satellite photo of the New Siberian Islands, with the Laptev Sea on the left and part of the East Siberian Sea shown on the right.

This sea is one of the least studied in the Arctic area. It has severe climate, low water salinity, and little flora, fauna and human population. The depths are shallow (mostly less than 50 meters). There are slow sea currents, low tides (below 25 cm) and frequent fogs, especially in summer. The ice fields only fully melt in August–September. The sea shores were lived on for thousands of years by tribes of Yukaghirs, Chukchi and then Evens and Evenks.

The largest city and port is Pevek, the northernmost city of mainland Russia.

The most important of the rivers flowing into the East Siberian Sea are the Indigirka, the Alazeya, The Ujandina, the Chukochya River, the Kolyma, the Rauchua, the Chaun, and the Pegtymel. Only a few rivers are able to be travelled on. The coastline of the sea is 3,016 km long.

There are few flora and fauna due to the harsh climate. The summer plankton bloom is short. It makes 5 million tons of plankton in August and September. The yearly amount is 7 million tons.

All content from Kiddle encyclopedia articles (including the article images and facts) can be freely used under Attribution-ShareAlike license, unless stated otherwise. Cite this article:
East Siberian Sea Facts for Kids. Kiddle Encyclopedia.