Shadwell is a small but affluent village, suburb and civil parish in north east Leeds, West Yorkshire, England. The village is 6 miles (9.7 km) to the north east of Leeds city centre. Shadwell is also close to Wetherby; the local newspaper is the Wetherby News. It has a population of 1,864, reducing to 1,849 at the 2011 Census.

Shadwell borders with Alwoodley, Roundhay, Whinmoor and Moortown from where the main road to the village Shadwell Lane begins. The village is in the LS17 postal code and is served by the Shadwell Parish Council. Shadwell is being increasingly referred to simply as an area or suburb of Leeds but retains its many village traditions.

The first written proof of Shadwell's existence is in 1086 in William the Conqueror's Domesday Book, where it is called Scadewelle. Shadwell is thought to be named after the numerous trees that once covered the village with shade and the many wells that were once in use throughout the village. The village pub "The Red Lion" is located between two wells which were originally used to gather water for the brewing process.

Shadwell was historically a township in the ancient parish of Thorner in the West Riding of Yorkshire. Roundhay Grange, originally a grange of Kirkstall Abbey, was a detached part of the township. In 1866 the township became a separate civil parish, but in 1912 the parish was abolished and absorbed into Leeds.

In 1974 Shadwell became part of the enlarged City of Leeds in the new county of West Yorkshire. In 2002 the civil parish was reconstituted, with an elected parish council. 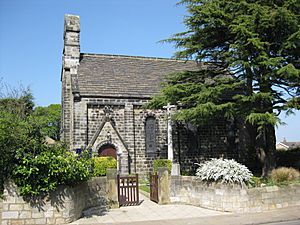 The village has two churches (the Church of England St Paul's, and Shadwell Methodist Chapel), a primary school, The Red Lion pub, the Village Hall, a social club, a tennis club, a golf club and six shops (clothing shop, beauty shop, dry cleaner, fish and chip shop, post-office/newsagent and a hairdresser). The library, which has operated independently since 2013, is a Grade II Listed Building which served as the Methodist Chapel from 1814 to 1892. There is also a cricket club. Shadwell United is a junior football club which trains at the primary school. There are thriving Scouts, Cubs, Beavers, Guides and Ranger groups. There is a stone millennium wheel on Main Street, Shadwell.

All content from Kiddle encyclopedia articles (including the article images and facts) can be freely used under Attribution-ShareAlike license, unless stated otherwise. Cite this article:
Shadwell, West Yorkshire Facts for Kids. Kiddle Encyclopedia.