Morley is a market town and a civil parish within the City of Leeds metropolitan borough, in West Yorkshire, England. Morley is the largest town in the Borough of Leeds after Leeds itself. Morley forms part of the Heavy Woollen District.

The town is split between the Morley North and Morley South wards (containing the town centre) of Leeds City Council, both making up the western half of the Morley and Outwood parliamentary constituency.

Morley is first mentioned in the Domesday Book in 1086 as Morelege, Morelei and Moreleia. Morley means "open ground by a moor", from Old English mōr "moor, clearing, pasture" + lẽah "open ground, clearing". It also gave its name to Morelei Wapentac, a wapentake which probably met at Tingley.

The town was later famous for its textile industry, notably the cloth, shoddy, which was worn by both sides in the American Civil War. 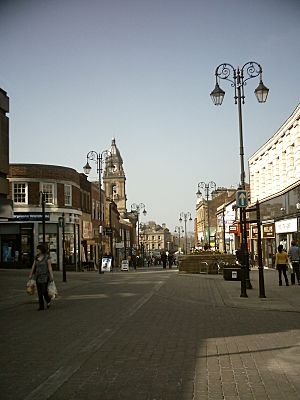 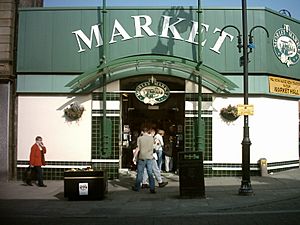 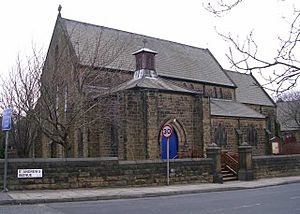 Morley Town Hall is sometimes used for music recordings. Television programmes, Heartbeat and Emmerdale have used its disused magistrates court and a cobblestoned street to one side. It hosts concerts by local schools and performances by the Morley Amateur Operatic Society, whose pantomimes have taken place at the Alexandra Hall for many years.

Orbit nightclub hosted the world's biggest techno, trance and hard house DJs. during the late 1990s, the club became a mecca of Northern rave culture until its sudden closure in 2003.

Morley annually holds one of the largest St George's Day parades in the country and has been named "the most patriotic town in England".

Morley Market has been a feature since the town was formed. Now with more than trading units, the market building has a large trading hall split up into units housing fruiterers, delicatessens, butchers, fishmongers, fashion shops and a café.

Supermarkets in Morley include Morrisons in the town centre and there is also a 24-hour ASDA superstore.

Scatcherd Park in the centre of Morley, by the Morley Leisure Centre, has a large playing field, a skate park, children's park, bowling green and memorial gardens. Events are held on the adjoining field in the summer months.

On 21 February 2010, a statue of Ernie Wise was erected outside Morley Post Office to divided opinion and unveiled by his widow, Doreen. Wise had performed in the old nearby cinema, just around from the Post Office, of which is no longer in use and now derelict.

On 25 June 2012, the Olympic Torch paused at the Morley Academy on its tour of Britain ahead of the London Olympic Games 2012.

Morley railway station is half a mile (800 m) from the town centre on the Huddersfield Line. There is a service seven days a week to and from Leeds, but on Sundays, the service is less frequent.

Buses go to Leeds, Bradford, Wakefield and other West Yorkshire towns from bus stops near the Town Hall.

The M621 motorway runs to the west of the town and the M62 motorway to the south. Junctions 27 and 28 of the M62 are closest to Morley.

Morley is a setting for David Peace's Red Riding Quartet novel and 2009 television series which explore West Yorkshire police corruption during the 1970s, and 1980s. Emmerdale often use Morley for filming court and wedding scenes in the town hall.

Morley R.F.C. was founded in 1878. When the Northern Union clubs broke away from the RFU to form the rugby league, the Morley representatives missed the train to Huddersfield due to being in the pub. The club's heyday was in the 1970s when it won the Yorkshire Cup on five occasions. In April 2005 the club won the Powergen Intermediate Cup at Twickenham.

Independent Wrestling company Dynamic Pro Wrestling (DPW) is based in Morley and put on shows at Ackroyd Street Working Mens Club and around West Yorkshire until its closure in 2011.

Natives of the town refer to themselves as Morleians. Notable Morleians include:

All content from Kiddle encyclopedia articles (including the article images and facts) can be freely used under Attribution-ShareAlike license, unless stated otherwise. Cite this article:
Morley, West Yorkshire Facts for Kids. Kiddle Encyclopedia.