The Emley Moor transmitting station is a telecommunications and broadcasting facility on Emley Moor, 1 mile (1.6 km) west of the village centre of Emley, mid-way between the villages of Kirkburton and West Bretton, in turn between Huddersfield and Wakefield, West Yorkshire, England. It is made up of a 330.4-metre (1,084-foot) concrete tower and apparatus that began to transmit in 1971. It is protected under UK law as a Grade II listed building. It is the tallest freestanding structure in the United Kingdom, and 24th tallest tower in the world. It was the seventh tallest freestanding structure and was fourth tallest tower in the European Union before Brexit.

The tower's current official name, The Arqiva Tower, is shown on a sign beside the offices at the base of the tower, but it is commonly known just as "Emley Moor".

In March 2018, a temporary mast was erected so that work could be undertaken on the main tower's transmitting arrays without interrupting transmissions. The temporary mast, at 324 m (1,063 ft), is shorter than the original tower, but lit in the same way with aircraft warning lights.

The present concrete tower is the third antenna support structure to have occupied the site. The original 135-metre (443 ft) lattice tower was erected in 1956; to provide Independent Television broadcasts to the Yorkshire area. It entered service on 3 November 1956, transmitting Granada Television programmes on weekdays, and ABC TV programmes at weekends. In 1964, it was replaced by a taller 385.5 metres (1,265 ft) guyed mast, identical to the structure at Belmont transmitting station in Lincolnshire, at 53°36′46″N 1°39′58″W﻿ / ﻿53.612700°N 1.666078°W﻿ / 53.612700; -1.666078 (see map on http://tx.mb21.co.uk/gallery/gallerypage.php?txid=336&pageid=69 ). The dismantled lattice tower was rebuilt at Craigkelly transmitting station. Yorkshire Television commenced broadcasting from the Emley Moor transmitter following the reorganisation of the ITV franchises on 29 July 1968 .

Emley Moor has been a transmission site since the earliest days of commercial television in the UK. The first permanent transmitter built there was for ITV, covering much of the north of England. It had a 135 metres (443 ft) lattice tower, which provided limited coverage. Its performance was improved in anticipation of colour PAL transmissions in 1966, when a 385 metres (1,263 ft) guy-supported tubular mast was erected. It was constructed from curved steel segments to form a 2.75 metres (9 ft) diameter tube, 275 metres (902 ft) long, and was surmounted by a lattice section 107 metres (351 ft) tall, and a capping cylinder, bringing the total height to 386 metres (1,266 ft). At the time of its construction, it was one of the tallest man-made structures in the world. It was designed by British Insulated Callender's Cables (BICC), and manufactured by EMI, and built by J. L. Eve Construction.

The cylindrical steel mast was regularly coated in ice during the winter months, and large icicles formed on the guy wires, placing them under great strain. During winter, ice falling from the guy-wires was common. For this reason, red warning lights on the tower operated when ice was a hazard, and notices were posted on the fence adjacent to Jagger Lane, below the guy wire crossings.

On 19 March 1969, a combination of strong winds and the weight of ice that had formed around the top of the mast and on the guy wires caused the structure to collapse. The duty engineer wrote the following in the station's log book, demonstrating that failure of the structure was completely unexpected: 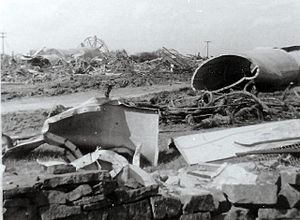 Wreckage of the Emley Moor Mast, which collapsed in March 1969, strewn across fields.

The collapse left sections of twisted mast strewn over the transmitter site, and across the junction of Common Lane and Jagger Lane, and the surrounding fields. Although a falling stay cable cut through a local church and across the transmitter site buildings, no one was injured. It completely disabled the BBC2 UHF transmitter and the ITV VHF transmitter, leaving several million people without service. BBC1 VHF television transmissions continued from Holme Moss. The Independent Television Authority (ITA) owned a collapsible emergency mast, 61 metres (200 ft) tall, which was moved to Emley from the Lichfield transmitting station so that some service could be restored. ITV signals were restored to 2.5 million viewers within four days. The BBC provided a mobile mast on an outside broadcast van to restore a restricted BBC2 colour service within two days. The ITA bought a larger temporary mast from a Swedish company. A crew of Polish riggers were hired, and a 204 metres (669 ft) mast was erected in under 28 days at a cost of £100,000. This mast could hold only one set of antennae, so many viewers in outlying areas still could not receive colour programmes. The taller mast was brought into service on 16 April. Some weeks later, the BBC erected a 91 metres (299 ft) mast, improving coverage.

The accumulation of ice was believed to have caused the collapse, but a committee of inquiry attributed it to a form of oscillation which occurred at a low but steady wind speed. Modifications, including hanging 150 tons of steel chains within each structure, were made to similar masts at Belmont and Winter Hill. None of the modified masts have collapsed.

A section of the collapsed tower was converted for use as a racing control tower at Huddersfield Sailing Club.

The structure is a tapered, reinforced concrete tower. It is the tallest freestanding structure in the United Kingdom at a height of 1,084 feet (330 m), 20 metres taller than The Shard. Reaching the tower room at the top of the concrete structure at 900 feet (274 m) involves a seven-minute journey by lift. The antenna structure above it is a further 184 feet (56 m) tall. The mast's foundations penetrate 20 feet (6 m) into the ground, and the whole structure, including foundations, weighs 11,200 tonnes. The tower was designed by Arup. When built, it was the third-tallest freestanding structure in Europe, after the Ostankino Tower at 1,772 feet (540 m), and the Fernsehturm Berlin (current height 1,207 feet (368 m)). The top of the tower is 1,949 feet (594 m) above sea level, due to the site's elevated position on the eastern edge of the Pennines. The tower is not open to the public. There was an observation area off the main road that runs past it, but as of 25 February 2018, this seems to be closed. The tower has a top-floor interior equipment area at a height of 330 metres (1,083 ft), which is accessible to people. 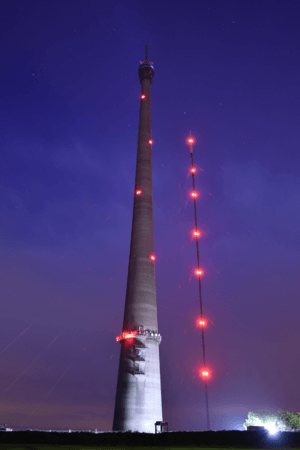 The tower at night

In 2002, English Heritage granted the tower Grade II listed building protection under UK law, being the lowest and most common of three categories, for meeting its criteria of significant architectural or historic interest.

Emley Moor tower broadcasts six digital television multiplexes, three digital radio ensembles, and two independent local radio stations (Capital Yorkshire and Heart Yorkshire), over an area of approximately 10,000 km². It is the main station for 57 relays and repeaters throughout Yorkshire and the surrounding counties. In July 2007, it was confirmed by Ofcom that Emley Moor would remain a B group transmitter after digital switchover (DSO).

The area is important for RF, radio frequency transmission, and from the foot of the structure, both Holme Moss and the Moorside Edge transmitter are visible. They are within a ten mile (16 km) radius, and are SW and WNW respectively.

Its television coverage area is one of the largest in the UK; covering most of Yorkshire including Hull, Leeds, Sheffield and York. Some transmissions can be received in Greater Manchester across the Pennines due to the height of the antenna on the tower and the powerful signal.

Over the years, the concrete structure has been updated to reflect the changing nature of communications and technology. At the top and bottom of the tower, supporting structures have been attached to accommodate dishes and aerials.

The BBC reported in July 2006 that for up to two weeks, it would broadcast analogue and digital signals at a lower power than usual, or shut down between 09:00 and 15:00 BST on weekdays from late July until 4 August, to allow aircraft warning lights to be fitted and repairs carried out. Repairs were estimated to affect around five million homes; however, a spokesperson for National Grid Wireless announced that the work had been scheduled around major events.

Digital UK reported in April 2010 that the transmitter would undergo work in preparation for the digital switchover (DSO) in 2011. Disruption to some or all Freeview services was expected to last for around two months, during which time a reserve transmitter would continue to broadcast the five main analogue channels. The work was then reported to be continuing into September due to "poor weather conditions and complex engineering issues". 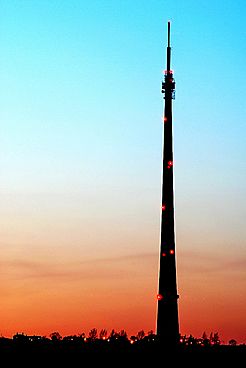 At Emley Moor, BBC Two analogue closed on 7 September 2011, and ITV1 temporarily moved onto its frequency at the time to allow BBC A mux to launch in its place. The remaining four analogue services closed on 21 September 2011, with the remaining digital multiplexes given a power increase. Analogue television transmissions in the UK have now ceased permanently.

Below is a list of transmitters that relay Emley Moor.

Other structures of comparable height

All content from Kiddle encyclopedia articles (including the article images and facts) can be freely used under Attribution-ShareAlike license, unless stated otherwise. Cite this article:
Emley Moor transmitting station Facts for Kids. Kiddle Encyclopedia.