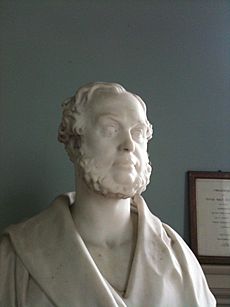 Bust of Titus Salt (not then a baronet) presented to him by his workforce in 1856, and now in Saltaire United Reform Church.

Sir Titus Salt, first baronet (20 September 1803 – 29 December 1876), was born in Morley near Leeds. He was a manufacturer, politician and a phillanthropist in Bradford, West Yorkshire.

His father Daniel Salt was a dry salter and then he decided to become a farmer. His mother died when he was quite young. Titus Salt had 11 children.

After working as a woolen stapler for two years at a mill near Wakefield he became his fathers business partner-Daniel Salt and son. The company used Russian Donskio wool, which was widely used in the woollens trade, but not in worsted cloth. Titus visited the millers in Bradford.

After working for two years as a wool-stapler in Wakefield he became his father's partner in the business of Daniel Salt and Son. He set up as a spinner and manufacturer.

In 1836, Titus came upon some bales of Alpaca wool in a warehouse in Liverpool and, after taking some samples away to experiment, came back and bought the consignment. Though he was not the first in England to work with the fibre, he was the creator of the lustrous and subsequently fashionable cloth called 'alpaca'. (The discovery was described by Charles Dickens in slightly fictionalised form in Household Words).

In 1833 he took over his father's business and within twenty years had expanded it to be the largest employer in Bradford. In 1848 Titus Salt became mayor of Bradford. Smoke and pollution came from mills and factory chimneys. Salt tried unsuccessfully to clean up the pollution using a device called the Rodda Smoke Burner.

Around 1850, he decided to build a mill large enough to consolidate his textile manufacture in one place, but he "did not like to be a party to increasing that already over-crowded borough". So he bought land three miles from the town in Shipley next to the River Aire, the Leeds and Liverpool Canal and the Midland Railway and began building in 1851. He opened it with a grand banquet on his 50th birthday, 20 September 1853, and set about building houses, bathhouses, an institute, hospital, almshouses and churches, that make up the model village of Saltaire. He built the Congregational Church which is now Saltaire United Reformed Church, at his own expense in 1858–59, and donated the land on which the Wesleyan Chapel was built.

All content from Kiddle encyclopedia articles (including the article images and facts) can be freely used under Attribution-ShareAlike license, unless stated otherwise. Cite this article:
Titus Salt Facts for Kids. Kiddle Encyclopedia.