In the United Kingdom a baronet is a man who has the title Sir, like a knight, but who is neither

Unlike the members of the orders of chivalry and a knight bachelor a baronet can pass his title to his children.

Baronets rank higher than knights, but below barons.

Some baronets were created in the 1300s, but the modern Order of Baronets dates from King James I of England.

On 22 May 1611 King James I set up the present hereditary Order of Baronets in England. He made 200 gentlemen of good birth baronets. He did this partly to reward those people with more than a knighthood, without making them as important as a Baron. The other reason was that the king needed money to keep soldiers in Ireland. Each of the new baronets had to pay £1095, which was the cost of keeping thirty soldiers for three years.

In 1619 James I set up the Baronetage of Ireland, to raise more money.

Today over a hundred baronets of Nova Scotia still exist. The Duke of Roxburghe, who is also Baronet of Innes-Ker of Innes is the Premier Baronet of Scotland because the baronetcy is the oldest one still existing in Scotland. It was created in 1625. 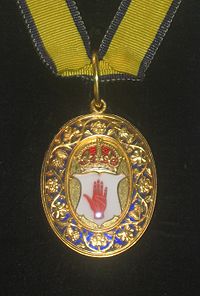 Badge of a United Kingdom Baronet

The Baronets of Nova Scotia were allowed to wear a badge from 1629. The design on the badge is the same as the flag of Nova Scotia

Baronets of England, of Ireland, of Great Britain or of the United Kingdom had no badge until 1929.

All content from Kiddle encyclopedia articles (including the article images and facts) can be freely used under Attribution-ShareAlike license, unless stated otherwise. Cite this article:
Baronet Facts for Kids. Kiddle Encyclopedia.