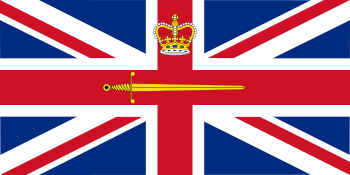 Flag of a Lord Lieutenant

The title Lord Lieutenant is given to the British monarch's personal representatives around the United Kingdom, usually in a county, with varying tasks throughout history. Usually a retired local notable, senior military officer, peer or business person is given the post honourarily. Both men and women are eligible for the post.

In England and Wales and Ireland, the lord lieutenant was the principal officer of his county. His creation dates from the Tudors.

Lieutenants were first appointed to a number of English historic counties by Henry VIII in the 1540s, when the military functions of the sheriff were handed over to him. He raised was responsible for the efficiency of the local militia units of the county, and afterwards of the yeomanry, and volunteers. He was Commander of these forces and appointed their officers.

Lieutenancies became more organised soon, probably in the reign of his successor Edward VI, their establishment being approved by the English parliament in 1550. It was not until the threat of invasion by the forces of Spain in 1585 that lieutenants were appointed to all counties. After the defeat of the Spanish Armada, the need for lieutenants was reduced — and the lieutenancies of some counties were left vacant in the 1590s.

The three ridings (sub-divisions) of Yorkshire each got their own.

The official title of the office at this time was His or Her Majesty's lieutenant for the county, but as almost all office-holders were peers they were referred to as "lord-lieutenant".

The Territorial and Reserve Forces Act 1907 established County Territorial Force Associations, of which the lord-lieutenant was to be head. So the combination of counties and county corporates as lieutenancy counties was restored.

Local Government reform in England in 1965 led to the appointment of lord-lieutenants to Greater London and Huntingdon and Peterborough, and the abolition of those of the County of London, Middlesex and Huntingdonshire.

A more fundamental reform of local government throughout England and Wales (outside Greater London) created a new structure of metropolitan, non-metropolitan and Welsh counties in 1974. Section 218 of the Local Government Act 1972 that established the new system stated: "Her Majesty shall appoint a lord-lieutenant for each county in England and Wales and for Greater London..." The Act appears to be the first statutory use of the term "lord-lieutenant" for lieutenants to counties.

In 1975 counties ceased to be used for local government purposes in Scotland. The Local Government (Scotland) Act 1973 replaced the counties with regions, and each region was to have one or more lord-lieutenants appointed. The areas to which they were appointed approximated to the counties and were based and were defined in terms of the new local government districts.

In 1996 Scottish regions and districts were abolished on further local government reorganisation, and since that date lord-lieutenants have been appointed to lieutenancy areas.

Partial reform of local government in England since 1995 has led to the creation of so-called ceremonial counties to which lord-lieutenants are now appointed. The Lieutenancies Act 1997 is the most recent piece of primary legislation dealing with Lieutenancies in England and includes the definitive list of the current areas used. Ceremonial counties may be comprised of combinations of county council areas and unitary authorities.

Since the local government re-organisation of 1996 in Wales, lord-lieutenants are now appointed to preserved counties.

The City of London was unaffected by changes introduced since 1882. It has a Commission of Lieutenancy rather than a single Lord-Lieutenant. The Head of the Commission is the Lord Mayor of London.

The modern responsibilities of lord-lieutenants include:

As the sovereign's representative in his or her county, the Lord-Lieutenant remains non-political and holds no office in any political party. The usual age of retirement is 75. They are appointed for life, although the sovereign may remove them.

The Lord Lieutenant of Ireland was the head of the British administration in Ireland until the foundation of the Irish Free State in 1922.

Correct forms of address for the Lord-Lieutenant

All content from Kiddle encyclopedia articles (including the article images and facts) can be freely used under Attribution-ShareAlike license, unless stated otherwise. Cite this article:
Lord Lieutenant Facts for Kids. Kiddle Encyclopedia.