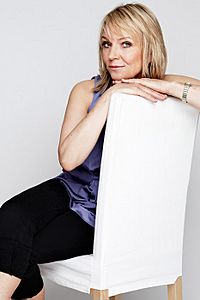 Helen Fielding (born 1958) is a British novelist and screenwriter. She is best known as the creator of the book series about the fictional character Bridget Jones. Bridget Jones's Diary (1996) and Bridget Jones: The Edge of Reason (1999) were published in 40 countries and sold more than 15 million copies. The book series spawned a trilogy of movies. Renée Zellweger starred as Jones.

Fielding was born in Morley, West Yorkshire. She was in a relationship with American screenwriter Kevin Curran from 1999 until his death in 2016. The couple had two children.

All content from Kiddle encyclopedia articles (including the article images and facts) can be freely used under Attribution-ShareAlike license, unless stated otherwise. Cite this article:
Helen Fielding Facts for Kids. Kiddle Encyclopedia.