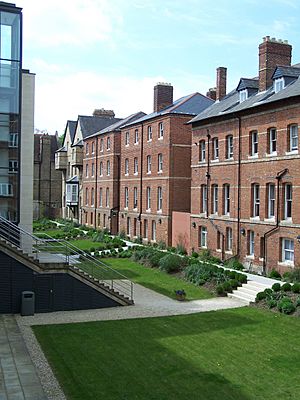 St. Anne's College is one one of the colleges of the University of Oxford. It was founded in 1879 as The Association for the Education for Women. It was the first institution in Oxford for the education of female students. In 1942, it was renamed as the St. Anne Society. In 1952, it received a Royal Charter as a college, for female students only.

All content from Kiddle encyclopedia articles (including the article images and facts) can be freely used under Attribution-ShareAlike license, unless stated otherwise. Cite this article:
St Anne's College, Oxford Facts for Kids. Kiddle Encyclopedia.