Kids Encyclopedia Facts
Not to be confused with Walton, Wakefield. 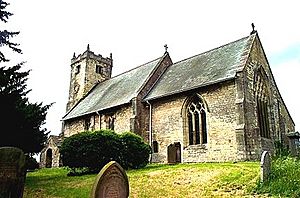 Walton is a village and civil parish 2 miles (3 km) east of Wetherby, West Yorkshire, England. It is adjacent to Thorp Arch village and Thorp Arch Trading Estate. The village is in the LS23 Leeds postcode area, post town WETHERBY. The nearest locally important town is Wetherby, with Tadcaster and the large village of Boston Spa nearby. Walton has a population of 225. increasing slightly to 225 at the 2011 Census.

The name Walton comes from settlement/farmstead of Wealas - native Celts which is what the new Anglo Saxon speaking peoples called the native inhabitants of England. There is strong evidence that in many areas of England taken over by Germanic speaking settlers, the native British (Wealas) remained undisturbed, farming the same land they did when the Romans left. Over time they just adopted or forgot their Celtic tongue (similar to Old Welsh/Cornish) for the language and culture of the newcomers in order to climb the social ladder or were coerced to do so. It was in the Anglo Saxon interest that the native British carry on as usual to ensure the economy produced food and goods for the new landowners.

For a while in the 1990s there was a plan to develop Walton into a New Town. Although this plan was never put into practice, the plan could still be brought back onto the table due to the land being still available and the communications in the area being even better.

The village has one public house, The Fox and Hound. This suffered a fire recently. The village is overlooked by the eight story buildings of the British Library on the Thorp Arch Trading estate. The trading estate was a former Royal Ordnance Factory, ROF Thorpe Arch, and it houses the local corporation (Leeds City Council) recycling centre, the British Library Boston Spa, George Moores furniture factory, a sewage works and retailing park (containing Empire Direct, DFS, The Sofa Company, The Greenery Garden Centre and many other retailers). The retail park once housed a Miller Brothers before the company liquidated and a Texas Homecare.

There are now speed cameras on the Walton Road, between Wetherby and Walton (the only ones in the area).

Walton was once on the Harrogate to Church Fenton Railway Line, until it was dismantled under the Beeching Axe in the 1960s. The village itself never had a railway station, the nearest being in Thorp Arch. The village is both commutable for the cities of Leeds and York.

All content from Kiddle encyclopedia articles (including the article images and facts) can be freely used under Attribution-ShareAlike license, unless stated otherwise. Cite this article:
Walton, Leeds Facts for Kids. Kiddle Encyclopedia.