Kids Encyclopedia Facts
This page is about the suburb of Leeds, England. For the cricket and rugby stadium, see Headingley Stadium. For the Canadian municipality, see Rural Municipality of Headingley.

Headingley is a suburb of Leeds in West Yorkshire, England. It is approximately two miles out of the city centre, to the north west along the A660 road. Headingley is notable for being the location of the Beckett Park campus for Leeds Beckett University and Headingley Stadium. 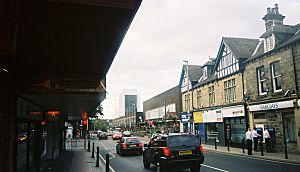 The centre of Headingley 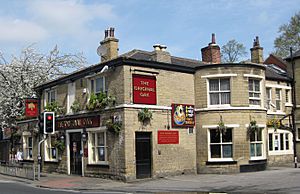 The Original Oak, named after the Skyrack Oak which grew opposite. 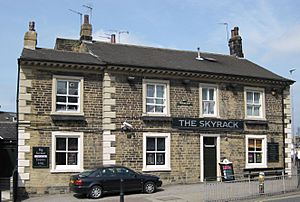 The Skyrack, historical remnants of the Wapentake.

Terrace houses typical of the southern districts of Headingley.

Headingley is first mentioned in the Domesday Book as Hedingelei or Hedingeleia in 1086 where it is recorded that Ilbert de Lacy held 7 carucates (about 840 acres) of land. The name is thought to derive from Old English Head(d)inga 'of the descendants of Head(d)a' + lēah 'open ground', thus meaning "the clearing of Hedda's people". Headda has sometimes been identified with Saint Hædde. However, a stone coffin found near Beckett Park in 1995 suggests there may have been an earlier settlement in late Roman or post-Roman times.

From Viking times, Headingley was the centre of the wapentake of Skyrack, or Siaraches, the "Shire oak". The name may refer to an oak tree that was used as a meeting place for settling legal disputes and raising armies. An ancient oak, said to be the Shire Oak, stood to the north of St Michael's Church until 1941, and gives its name to two pubs, the Original Oak and the Skyrack.

During the 13th century William de Poiteven gave land in Headingley to Kirkstall Abbey, and in 1341 the remainder of the township of Headingley-cum-Burley was given to the monastery by the then owner, John de Calverley. 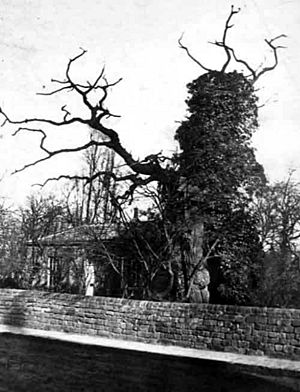 A map of 1711 shows Headingley as having a chapel, cottages and farmsteads scattered around a triangle of land formed by the merging of routes from north, west and south. Enclosed fields were situated around the settlement with a large tract of common land, Headingley Moor, to the north. In an 1801 census, Headingley's population is given as 300.

An 1829 Act of Parliament enclosed Headingley Moor and the land was placed for sale. Around 30 workers' cottages had by then encroached upon the fringes of the moor before 1829. Land in this vicinity was generally cheaper than that at Headingley Hill as it failed to attract the building of affluent villas. This brought about the building of smaller terraced housing around Moor Road and Cottage Road. In the mid 19th century, Far Headingley had begun to develop over what was largely unclaimed common land.

Headingley continued to be a village until the expansion of Leeds during the Industrial Revolution and became a popular suburb where the rich moved to escape the filth and pollution of the city.

In 1840, it became the site of Leeds' Zoological and Botanical Gardens. Despite the opening of Headingley railway station, serving the gardens, in 1849, the zoo was a loss-making venture and closed in 1858. The bear pit still survives and can be seen on Cardigan Road.

The Meanwood Beck, to the east of the village, was a source of water for the early inhabitants and later provided a source of power for the Victorians of Leeds.

The Leeds Tramway terminated at a depot at Far Headingley from 1875 to 1959, improving the accessibility of Headingley from Leeds city centre. Improved transport facilitated further growth and attracted many more affluent middle class inhabitants. The tramway perhaps ended Headingley's village status and made it into a suburb of Leeds.

With exception of Beckett Park and the surrounding area, most of Headingley had been developed by the beginning of the 20th century. In a 1911 census the population of Headingley was in excess of 46,000.

The area has a history of student inhabitation, with Leeds Metropolitan University having a campus at Beckett Park in Headingley. Much of the housing around Kirkstall Lane is rented to students. The conversion of Leeds Polytechnic into a university and its subsequent growth has brought about an increased student population in Headingley in the last ten years.

Throughout Headingley's modern era, the rugby and cricket stadia have been significant in the fabric of the area. A major England test match or a rugby league derby brings many spectators to the area. The cricket ground has been enlarged in recent years to maintain its eligibility for test matches while in 2006 the eastern terraces on the rugby ground were replaced with the current Carnegie stand. The winter shed cricket pavilion has been replaced with a new stand and media centre. 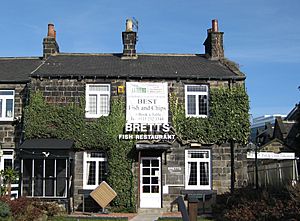 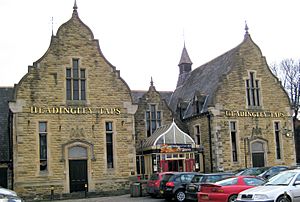 The Headingley Taps, a pub on North Lane

Headingley has two renowned fish and chip shops/ fish restaurants who have been serving since the 1930s: Brett's, a 19th-century stone building on North Lane, and Bryan's (now called The Fisherman's Wife), a more modern building on Weetwood Lane. There are several pubs and bars plus extensive shopping areas. The pub Headingley Taps is so called because it was formerly a water pumping station. Other pubs and bars include the famous Original Oak, Skyrack, Arcadia and The Arc. Close by in Far Headingley are in close proximity The New Inn, The Three Horseshoes and Woodies. In the Headingley Arndale Centre there is a Sainsbury's (formerly a Somerfield), a Wilkinson and several other chain shops as well as a small multi-storey car park. Headingley also has a small library on North Lane. There are many banks, building societies, restaurants, cafes and charity shops. Along Otley Road there is a Boots the Chemist and a large Oxfam bookshop. Until 2005 Headingley had two cinemas, 'The Lounge' and 'The Cottage Road Cinema' (usually referred to as 'Cottage Road'). The Lounge Cinema in the centre of Headingley has since closed and is being redeveloped as office and living accommodation, leaving only Cottage Road in Far Headingley. The area's Woolworths closed in the 1990s. Until the 1980s, the Arndale Centre boasted a bowling alley. The Arndale Centre began undergoing an external facelift in 2009. The nearest large supermarket is a Morrisons in Kirkstall, approximately a mile away from the centre of Headingley.

Many famous writers, past and present, are connected with Headingley: Arthur Ransome, best known perhaps for the children's classic Swallows and Amazons, was born there, J. R. R. Tolkien the famous writer, author of The Lord of the Rings, lived there when he worked at the university, playwright Alan Bennett once lived over a butcher's shop (now a dry cleaner's) opposite the Three Horseshoes and TV writer Kay Mellor lives in Weetwood today. Many writers and poets who currently live in the area participate in the annual Headingley LitFest, which takes place each March, using venues like the Heart Centre, The New Headingley Club, various cafés and private houses. The tenth LitFest will take place in 2017. Reviews of all talks and performances are online on the LitFest blog.

In the time of Queen Victoria, Prince Alemayehu of Abyssinia, brought to England after the defeat of his father King Tewedros, died of pneumonia at an address in Hollin Lane, Far Headingley.

Edward Baines, editor of the Leeds Mercury in the 19th century, had a grand house (since demolished) in Headingley.

Yorkshire Ripper Peter Sutcliffe committed two of his 20 attacks in Headingley. He killed 20-year-old Jacqueline Hill - the last of the 13 women he killed - in the area on 17 November 1980. On 24 September that year, he had also attacked Singapore born doctor Upadhya Bandara, 34, in the area, but she survived his assault. Sutcliffe was arrested within two months of Hill's murder and subsequently sentenced to life imprisonment for a total of 13 murders and seven attempted murders.

Celebrate Headingley is an annual series of events organised by Headingley Network, taking place for the ninth time in September 2009. It has been growing and developing since the first one in September 2001. The main intentions are to bring together members of a community which is often seen as beleaguered, to celebrate the diversity and strengths of the local population and to provide opportunities for residents to enjoy each other’s company in a variety of social situations. Events include musical, literary, social and children's events, and local restaurants offer special deals. 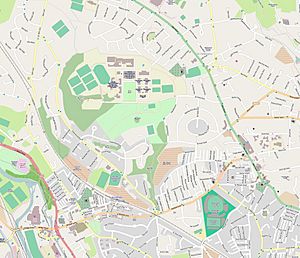 Headingley Development Trust (HDT) is an organisation, made up of concerned local residents and small businesses, formed with the aim of promoting and developing a sustainable community in Headingley. Currently HDT has over 825 members and runs many projects in the area.

Headingley in Bloom is responsible for planting flowers around Headingley with the help of local school children. Cafe Scientifique is a place where local residents can meet for mini ‘lectures’ on all things Scientific. Headingley Homes is a project which directly intervenes into the housing market. To address the demographic imbalance HH aims to purchase homes to be leased to families rather than continue as a HMOs (houses of multiple occupation). Pig and Fowl Co-ops is the newest project from HDT set up to purchase chicken and pork direct from the producer. This gives members access to high quality meat, humanely reared and killed, supporting local organic farming. Farmers Market. happens every second Saturday of the month which is certified by FARMA and is one of the most visible and successful projects of the Trust.

HDT have refurbished and developed Headingleys old primary school building on Bennett Road into a Headingley Enterprise and ARTs centre – HEART. It is to date Headingley's biggest ever community project. HEART accommodates rehearsal and meeting spaces and training rooms on the ground floor, a café with outdoor and conservatory seating areas and a 'catalyst’ business centre on the first floor particularly targeted at the arts and media industry. Besides the advantages of keeping the school in community use and introducing much needed facilities to central Headingley, HDT believes that HEART will create a new cultural buzz in Headingley, provide a space that all residents of Headingley can enjoy, secure the local business base and help to encourage graduates to stay on to make Headingley their permanent home.

For more information on the Trust visit: http://www.heartcentre.org.uk/

Headingley Castle was built in 1846 and was owned in 1866 by cloth merchant Arthur Lupton (1809-1889) of the Lupton family, who were the paternal ancestors of Catherine, Duchess of Cambridge. It was the home from 1909 to 1943 of entrepreneur and art collector Frank Harris Fulford, and later used to house a school for the blind.

Headingley also has a typical example of a 1960s Arndale Centre. Housing in Headingley is generally Victorian and early 20th century and mostly of little architectural note.

The ITV television series Fat Friends was set in Headingley. Large amounts of the eighties ITV Beiderbecke trilogy was filmed in and around Headingley and Becketts Park, along with Moor Grange and Pudsey. Parts of Headingley stood in for Northern Ireland in Harrys Game, and A Touch of Frost used locations in the area.

All content from Kiddle encyclopedia articles (including the article images and facts) can be freely used under Attribution-ShareAlike license, unless stated otherwise. Cite this article:
Headingley Facts for Kids. Kiddle Encyclopedia.