In excellent weather conditions the city of Manchester and the Greater Manchester area can be seen, as well as Winter Hill near Bolton, and the mountains of Snowdonia in North Wales. To the north across the Snake Pass lie the high moors of Bleaklow and Black Hill, which are of similar elevation.

Kinder Scout featured on the BBC television programme Seven Natural Wonders (2005) as one of the wonders of the Midlands, though it is considered by many to be in Northern England, lying between the cities of Manchester and Sheffield. 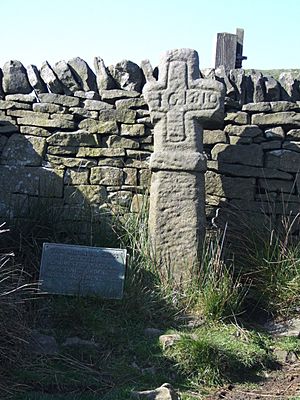 It is a popular hiking location and the Pennine Way crosses Kinder Scout and the moors to the north. This has resulted in the erosion of the underlying peat, prompting work by Derbyshire County Council and the Peak District National Park to repair it, in conjunction with the landowner, the National Trust.

Parts of the Kinder Scout plateau are still occasionally closed for conservation, public safety, grouse shooting or fire prevention reasons, but prior notice is generally given on the Peak District National Park Authority's website.

Kinder Downfall is the tallest waterfall in the Peak District, with a 30-metre fall, it lies on the River Kinder. Below the Downfall the River Kinder flows into Kinder Reservoir. In cold winters the waterfall freezes providing local mountaineers with an icy challenge that can be climbed with ice axes, ropes and crampons. The Edale Cross lies immediately south of Kinder Scout. The cross is a Scheduled Ancient Monument.

All content from Kiddle encyclopedia articles (including the article images and facts) can be freely used under Attribution-ShareAlike license, unless stated otherwise. Cite this article:
Kinder Scout Facts for Kids. Kiddle Encyclopedia.