Ecgfrith of Northumbria facts for kids 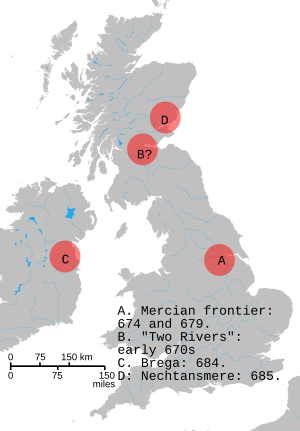 The wars of Ecgfrith of Northumbria

Ecgfrith (or Egfrith; c. 646–685) was the King of Deira from 664 until 670. When his father died he became King of Northumbria from 670 until his death. Ecgfrith ruled Northumbria when it was at the height of its power. His reign ended with his defeat at the Battle of Nechtansmere in which he lost his life.

Ecgfrith was a younger son of King Oswiu of Northumbria and his wife Enfleda. She was the daughter of King Edwin of Northumbria. He was born c. 646. In 655 he was ten years old when Penda of Mercia took him hostage. In 660, at age fifteen, Ecgfrith was married to Etheldreda, the daughter of King Anna of East Anglia. She was the widow of the princips Tondberht of the South Gyrwas. Even though she had been married she had retained her virginity. After her marriage to Ecgfrith she refused to consummate her second marriage and remained a virgin. She was encouraged by Bishop Wilfrid to remain celibate. This caused friction between Ecgfrith and Bishop Wilfrid.

In 660, shortly after the death of his father, Ecgfrith became King of Northumbria. Ecgfrith asked Bishop Wilfrid to convince the queen the kingdom needed an heir. He paid the bishop in gold and a great many hides of land to convince her but Etheldreda would not change her mind. The marriage was dissolved before the end of 672. Ethelreda was allowed to become a nun. She retired to Coldingham Priory and a year later she became the abbess of Ely, which she had built herself. Ecgfrith married as his second wife Eormenburg. She and Bishop Wilfrid became bitter enemies.

In 672 the Picts revolted and threw out the king that the Northumbrians had placed on the throne there. Ecgfrith sent his army into Pictland (Scotland) to punish them. He defeated the Picts and appointed his ealdorman Beornheth to rule over them. In 674 Wulfhere of Mercia and his allies attacked Northumbria. Wulfhere was trying to reclaim Lindsey. But Ecgfrith defeated Wulfhere and made him pay tribute. Wulfhere was succeeded as king of Mercia by his brother Aethelred in 675. Ecgfrith arranged for his sister Osthryth to marry Aethelred. But in 679 Aethelred defeated Ecgfrith in battle at the River Trent. To prevent a blood feud between the two royal families, Theodore, the Archbishop of Canterbury stepped in to prevent further bloodshed. He secured a truce between Northumbria and Mercia that lasted for 50 years. Ecgfrith next turned his attention to the Britons of Rheged. He drove them out of northern England and into Ireland. There they became mercenaries for the Irish kings and also began raiding the English coast. In 684 Ecgfrith led his armies against the kingdom of Brega, north of present day Dublin in Ireland. He won a victory and returned to Northumbria. At this point he may have become too confident. In 685 Ecgfrith again attacked the Picts but this time he was defeated and killed. On 20 May, 685 his forces were drawn into an ambush at Nechtansmere near Forfar in Scotland. Ecgfrith and his second wife Eormenburg had no children. Ecgfrith was succeeded by his half-brother Aldfrith. Queen Eormenburg retired to Carlisle abby.

In 674 Ecgfrith had given Benedict Biscop, a Northumbrian nobleman, fifty hides of land at the mouth of the River Wear. This was to build the first of two great monasteries. In 682 King Ecgfrith gave another forty hides of land to Benedict for a second monastery. It was to be at the mouth of the River Trent at Jarrow. The two monasteries were administered as a single community and came to be called Monkwearmouth-Jarrow Abbeys. They became a center of learning and were where Bede wrote most of his works. Ecgfrith was at the dedication of Jarrow abbey in 685 about a month before his death.

From 669 Bishop Wilfrid was directly involved in every gift of land and money to the Church by the Northumbrian king and queens. He became very powerful and rich in the process. In 671 he began building a great church which was financed by plunder and confiscated British church lands. But after Queen Etheldreda retired to her abbey he lost most of his rich patronage. The new queen, Eormenburg, had no love of Wilfrid. Stephen of Ripon, the author of the eighth-century Vita Sancti Wilfrithi ("Life of Saint Wilfrid") accused her of being jealous and not having the proper respect for the bishop. In 678 King Ecgfrith drove Bishop Wilfrid out of Northumbria. Bede gave no explanation for why Wilfrid was expelled, but made it clear his sympathies lay with the Bishop.

All content from Kiddle encyclopedia articles (including the article images and facts) can be freely used under Attribution-ShareAlike license, unless stated otherwise. Cite this article:
Ecgfrith of Northumbria Facts for Kids. Kiddle Encyclopedia.